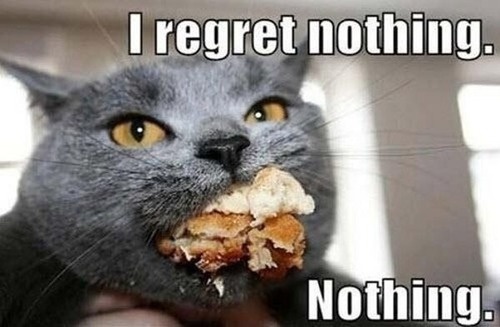 1. I keep telling myself I’m going to stick to a stricter diet once and for all and stop eating so much sugar. And yet…and yet…

2. Am I the only one who thinks sloths secretly look really creepy? Like they’re harboring an evil secret or something?

3. You know those cans of biscuits you buy in the cooler section of the grocery store, and how you’re supposed to pop them open with a spoon? The other day I was peeling the wrapper off one of those cans while also telling my husband a story about a time I set one of these cans down on the counter so hard it popped open and into the air and scared the bejeezus out of me. In the middle of my story about the spontaneous popping cans, you can guess what happened–the can in my hands popped and I screeched. Oh, the irony.

4. Here’s the song of the week. I actually found this by reading some of the comments from another YouTube user whom I’m following. The girl is Juliana and the song is an acoustic cover of Miike Snow’s ‘Animal’.

6. I’ve realized that I could waste hours between Buzzfeed and Tumblr just reading the bizarro conversations that people have. Some of these are so hilarious that I can’t even relay them to another person in the room because I’m laughing so hard. Others are just weird. The other day I started reading a thread about “the creepiest thing your child has ever done” and after half an hour or so of scrolling through I had to stop.  Honestly if I had a kid that did one of these things I wouldn’t know who to call first, the priest or the realtor.

7. I usually pride myself on being super-prepared for things, so I was fairly alarmed to realize that my anniversary is in less than two weeks and I haven’t a clue what to buy for the husband. Uh-oh.

8. I’ve given up and decided to count caffeine as a food group.

9. My hubby is in charge of the laundry in our house and for years he tried really hard to fold the sheets just so. I think he felt is was necessary to keep his nest mate happy. Then one day I admitted that when it’s up to me I just roll it on up and stuff it in the underbed bag that holds all the linens. I’ve never seen someone fold laundry so cheerfully.

10. I can’t think of a tenth thing so here is a picture of an overly excited cat.