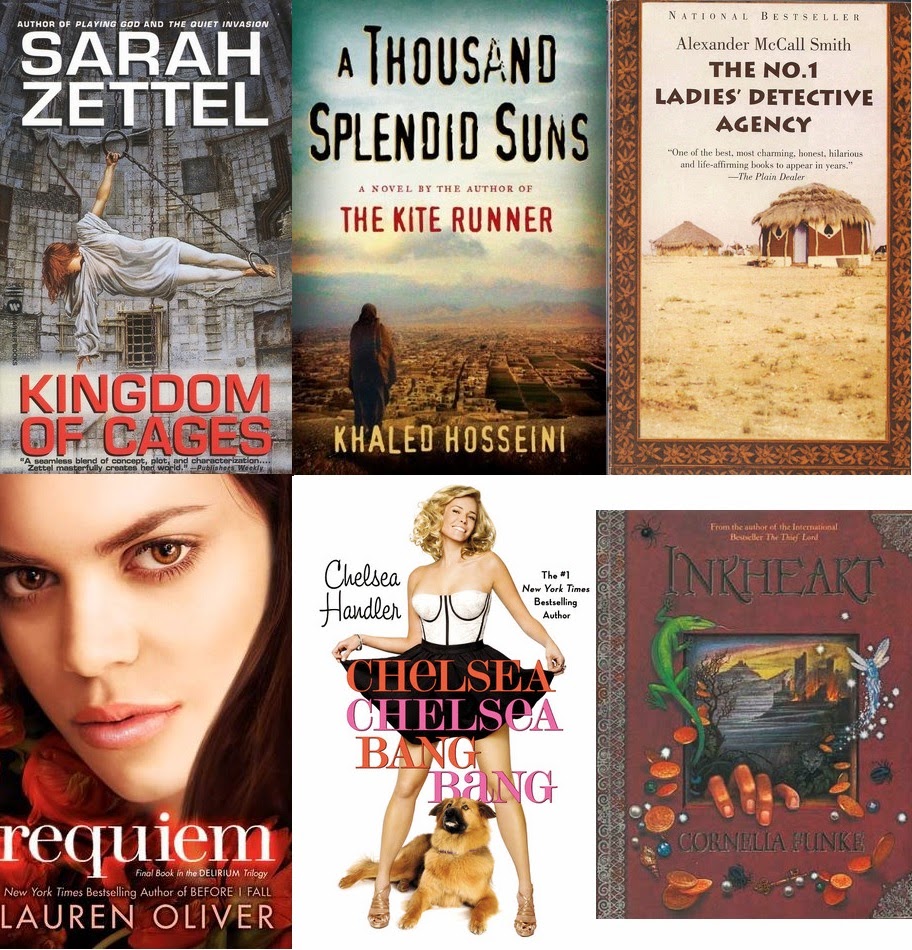 May certainly flew by! I thought it would be fun to show you guys the books I’ve been reading this month and some mini reviews of each. If you’re a big bookworm like I am then feel free to look me up on Goodreads!

Okay, on to the books. I read six books this month, which is actually kind of high for me considering that I normally don’t have a lot of time for leisure reading.

Kingdom of Cages, by Sarah Zettel. (Paperback, 608 pages) This futuristic sci-fi novel isn’t something I’d typically pick up, but I liked it overall. In a future where humanity is on the brink of extinction, Chena and Teal Trust and their mother are chosen to immigrate to Pandora, a planet fiercely guarded by a group of ecologically minded scientists. Once they get there, the Trust girls learn that the Pandorans don’t want new inhabitants, only their pure DNA for a science project–and they wind up on the run as they try to beat a system that is trying to enslave them. There are some rough patches and the twists and turns aren’t always the most original, but overall I think the characters were believable and the pacing was steady enough to keep me turning the pages. (3 of 5 stars)

A Thousand Splendid Suns, by Khaled Hosseini. (Hardcover, 372 pages) This one was kindly sent to me by Jasmine from Green Eyed Monster as part of the April book swap. The book spans about thirty years, from the era before the Soviet Invasion, through the occupation and the rise of the Taliban, to the post-Taliban era of rebuilding; the story is told through the eyes of two generations of women, Miriam and Laila. I’m not going to lie: this book was really hard to read, as it depicts the harsh reality of life as a woman in Afghanistan, where oppression and abuse are routine. That said, it’s a real page-turner and for all the sadness, bits of hope shine through so the story isn’t wholly depressing. You can also tell that the book was written by someone who has actually lived in Kabul as opposed to someone totally foreign to the culture; it was really interesting to see these decades from the perspective of a native author as opposed to an outsider. (5 of 5 stars)

The No. 1 Ladies’ Detective Agency, by Alexander McCall Smith. (Paperback, 235 pages) This was a zippy read! Precious Ramwotse is the cheerful Botswanan lady detective who often compares herself to Agatha Christie’s Miss Marple–fitting, I think, since Miss Marple was the literary character who kept popping into my head as I was reading. This book also came from Jasmine in the book swap (I feel so bad that she sent me two books and I only sent her one!). If you’re a big fan of hardboiled crime novels or noir detective novels then you won’t like this one, but if you like laid-back mysteries a la Miss Marple or Sherlock Holmes, where deduction and good sense wins out over violence, then this might be up your alley. (4 of 5 stars) 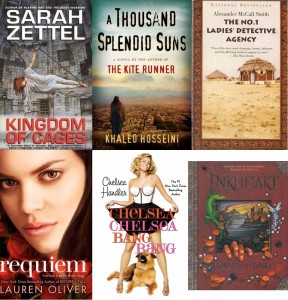 Requiem (Delirium #3), by Lauren Oliver. (Hardcover, 391 pages) I was really excited to wrap up this trilogy about a dystopian future where love is considered a disease and people are surgically “corrected” not to feel such emotions. I don’t want to give away any spoilers for any of you who haven’t read the book, but I felt like Lena really evolved over the course of the trilogy and the pacing stayed very taut throughout. That said, I didn’t enjoy this book as much as the last two; I felt like the end wasn’t very satisfying, as it’s both the end I predicted and also a very open-ended, not entirely wrapped up conclusion. It was still a good book, I just wish the series could have finished on the same tense note as the first two books. (4 of 5 stars)

Chelsea Chelsea Bang Bang, by Chelsea Handler. (Hardcover, 244 pages) Here’s the description from Goodreads: “Get ready for big laughs as Chelsea Handler lets loose with more comic personal essays. In this new, no-holds-barred account of life on the ridiculous side, Chelsea mines the wealth of material that is her family, her sex life, her career, and her distinctively outrageous worldview…Chelsea never lets anyone off the hook, even herself, as she delivers page after page of irreverent humor, biting wit, and deliciously off-kilter entertainment.” I’ve seen Chelsea on TV and read interviews with her in magazines, so I know she possesses the potential to be funny; but I didn’t find this book funny at all. Half the time she’s just being a jerk to the people around her, and the other half she’s making these jokes that are flatter than a slashed tire. My honest thought is that she wrote this book while drunk and/or high (both of which she talks about a lot), because that’s the only excuse for her thinking such a disjointed and crass series of ramblings was funny enough to submit to the printer. (Side note: I have nothing against crass humor done well. When you’re just being crass because you don’t know what else to do, that’s another story.) (1 of 5 stars)

Inkheart, by Cornelia Funke. (Hardcover, 534 pages) This is supposed to be a young adult novel, but it’s just as entertaining for any adults who fondly remember a childhood steeped in books. Young Meggie discovers that her father Mo can read characters right out of books; unfortunately, his unique talent led him to accidentally read a troupe of villains out of a novel, and now they are targeting Mo and his daughter because of that talent. Meanwhile, a traveling performer who was also read out of the book just wants Mo to read him home, and Meggie wonders if her mother–who disappeared into the novel–can ever come home again. The pacing was fair enough, though I do think the book is a bit over-long, at least for kids. (4 of 5 stars)