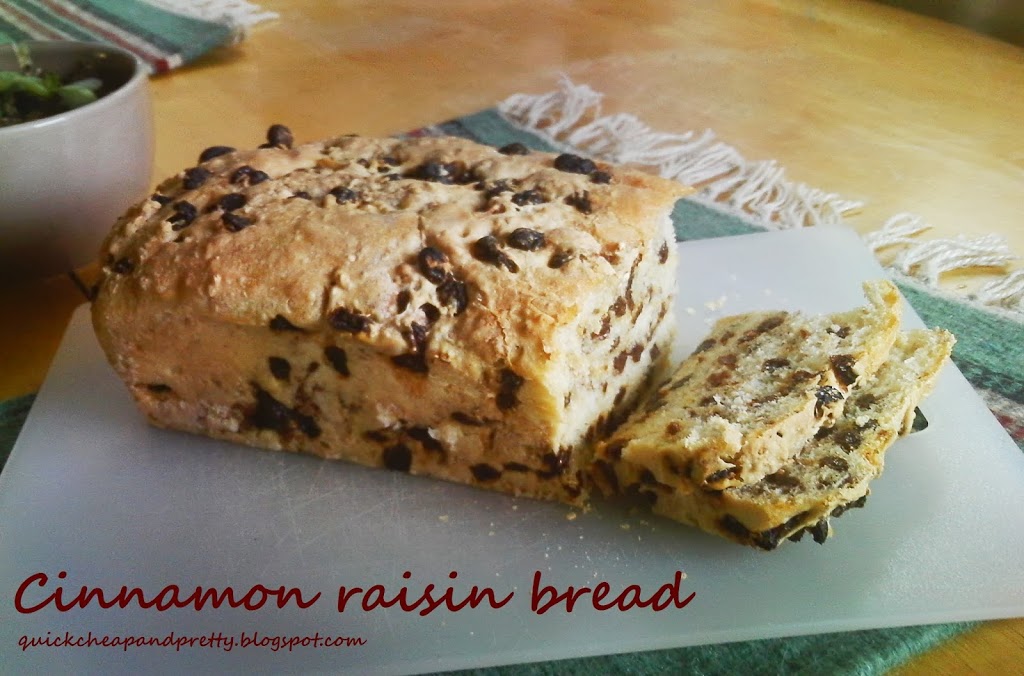 Today I’ve got a recipe for cinnamon raisin bread! When I was a kid my mom baked all of our bread from scratch. I was totally spoiled in the carb department. This is the recipe she passed down to me and not only is it super-easy to make, it only requires five ingredients to make the basic bread–no special bread flour, etc.–so it’s super-cheap, too. If you want to make plain bread for sandwiches or garlic toast, just go through the steps to make the bread without adding any cinnamon and raisins. 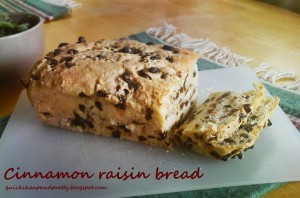 Put the water, yeast and sugar in a large mixing bowl and allow to “work” for 10-15 minutes. Make sure your water is only warm and not boiling hot, or it can kill the yeast. Add the oil and flour and mix well; dump out onto floured countertop, knead lightly, and return to mixing bowl to rise. Cover with a clean dish towel and place in a warm corner of the kitchen (away from any drafts) to rise for 45 minutes to an hour.

Flour the counter again and put a little shortening (vegan substitute) on your hands so you won’t stick to the dough, then punch down the risen dough and dump it out on the counter to knead lightly. Add the raisins and cinnamon and work into the dough as you are kneading. Cut the dough into two sections, form into loaves, and place in greased bread pans; cover with a dish towel and allow to rise for another 45 minutes.

Preheat the oven to 350 degrees (F). Bake the loaves for 40-45 minutes. Pop them out of the pans to cool on a cooling rack so the bottoms don’t get soggy; once they’ve cooled a bit, slice up and enjoy!

Once the loaves are completely cool, you can wrap up the second one for the freezer or give it to a friend…if it lasts that long (it never does in our house!). This bread makes great toast, too!