I got through a ton of books this month, though to be fair half of them were short mysteries, so it’s not like they were tough to breeze through! Some of this month’s picks were awesome and some were terrible, with a few in-between. As you can see, I went on a bit of an Agatha Christie bender this month, but I worked in a few other titles and genres as well.

Murder in Mesopotamia, by Agatha Christie (paperback, 240 pages). 4 out of 5 stars. Hercule Poirot arrives at an archeological site just in time to solve a classic “locked room” murder of a woman who claimed that her ex-husband was stalking her…from beyond the grave? This one had some good twists in it and I thought the end had a pretty clever explanation.

By the Pricking of My Thumbs, by Agatha Christie (paperback, 212 pages). 3 out of 5 stars. Tommy and Tuppence try to solve a series of mysterious goings-on involving an elderly woman raving about dead children and a painting of a house that Tuppence finds eerily familiar. This one wasn’t quite as smooth as Christie’s usual mysteries but it had an okay reveal at the end.

Indemnity Only, by Sara Paretsky (hardcover, 184 pages). 2 out of 5 stars. I really loved Paretsky’s drama Bleeding Kansas (which I read last month) so I was hoping I’d love her V.I. Warshawski detective novels, too. In this book V.I. is a tough-as-nails private eye trying to track down a mystery client, a banker’s dead son, and a missing girl with ties to the Chicago unions and mobs. Overall, I think this series is just okay, but maybe not really my cup of tea.

Deadlock, by Sara Paretsky (paperback, 320 pages). 2 out of 5 stars. V.I. Warshawski tries to untangle the details surrounding her cousin’s mysterious death at a shipyard. Again, this was just okay.

The Moving Finger, by Agatha Christie (paperback, 299 pages). 4 out of 5 stars. Oh, Miss Marple. There’s nothing better! I bolted down a total of eight Miss Marple mysteries this month. Here, Miss Marple is called in to assist in the case of some “poison pen” letters that lead to a suicide and a rash of terror in a small village.

At Bertram’s Hotel, by Agatha Christie (paperback, 223 pages). 2 out of 5 stars. This one didn’t really have the clever plotting of the typical Christie mystery and it seemed like it was pretty easy to figure out the mystery. I looked up some “best/worst” lists and it seems like this is a universal pick for one of the less impressive Christie mysteries.

The Body in the Library, by Agatha Christie (hardcover, 191 pages). 4 out of 5 stars. When the body of a lounge dancer appears in a distinguished colonel’s library, Miss Marple is called in to clear his name in her death. This one had a more intricate plot and an interesting twist at the end, and since it’s so short, it’s a great read-in-one-sitting title.

4:50 From Paddington, by Agatha Christie (hardcover, 286 pages). 4 out of 5 stars. Also known as What Mrs. McGillicuddy Saw!, this is probably one of the best Miss Marple mysteries. When her friend Mrs. McGillicuddy sees a murder on a passing train, but no body surfaces, Miss Marple enlists the help of a smart maid to scope out a mysterious old estate and get to the bottom of the case. This one has a pretty smart set-up and has one of those “aha” moments at the end where you realize it should have been obvious all along who was behind the murder, even though it didn’t seem apparent at the time!

A Pocket Full of Rye, by Agatha Christie (paperback 220 pages). 4 out of 5 stars. Another great advance set-up. Miss Marple investigates the sudden death of a businessman found with a pocket full of rye, and tries to discern the intent and identity of the murderer using the nursery rhyme. Another “aha! Why didn’t I guess that person?” reveal at the end.

Murder at the Vicarage, by Agatha Christie (hardcover, 288 pages). 4 out of 5 stars. This is the first Miss Marple mystery and establishes her ability to solve a crime based on the smallest of details. And it’s a good thing, too, because after a man is murdered she has two separate confessions and a very long list of suspects to sort through!

Sleeping Murder, by Agatha Christie (paperback, 303 pages). 4 out of 5 stars. A young woman purchases a house and begins having flashbacks of a murder that occurred there–but she seems to be the only one who knows of any such event. Miss Marple warns her of the dangers of delving into the past, but in the end, of course, we know that everyone starts digging around in a bid to solve the crime! I felt like it was a little easier to guess the villain than it should have been, but it was still a very good mystery.

A Murder is Announced, by Agatha Christie (hardcover, 288 pages). 4 out of 5 stars. A newspaper announcement lists a time and place for a murder, throwing a village into excitement; when a murder actually occurs, however, Miss Marple is called in to piece together the unlikely events of the night and find out what really happened when the lights went out at Letitia Blacklock’s house. 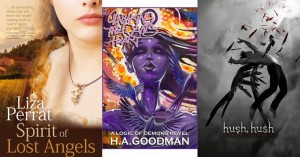 Spirit of Lost Angels, by Liza Perrat (paperback, 378 pages). 4 out of 5 stars. I reviewed this title in full here. This was a great piece of historical fiction and I really enjoyed it overall.

Breaking the Devil’s Heart, by H.A. Goodman (Kindle edition, 352 pages). 3 out of 5 stars. I reviewed this title in full here. This was a weird blend of fantasy, horror and philosophy but overall I think I liked it. It was definitely thought-provoking and really makes you rethink your concept of what defines good and evil.

Hush, Hush, by Becca Fitzpatrick (hardcover, 391 pages). 1 out of 5 stars. This was my “burn it with fire” moment of the month; I ranted at length about this title here. I’m not a fan of the Twilight series but this book made that whole franchise look like a gem.

Don’t forget to hook up with me on Goodreads here and send me your book recommendations! And remember to come back tomorrow to sign up for the Booktober swap–I’m cohosting with a bunch of my blogging besties and it’s going to be awesome.