It’s been a long time since I’ve done one of these posts! Well, two months…but that seems like a long time. Shockingly I don’t have a ton of books to post–I’ve been kept busy by work and classes, but one of my classes involves a lot of reading, so that’s kind of a win I think. Here’s what I read, for fun and for school, over the past couple of months.

Americanah (hardcover, 477 pages), by Chimimanda Ngozi Adichie. Four out of five stars. I had heard buzz about this book and picked it up not really sure whether I’d like it or not, but I ended up blown away by Adichie’s prose. I also found it really interesting to dive into issues of race, immigration and feminism from the perspective of a Nigerian female; I have to admit I felt quite culturally ignorant at times, but Adichie’s characters are incredibly enlightening, so that wasn’t a problem. I knocked off a star because the ending felt a little rushed, which disappointed me–the rest of the novel was so rich and well-paced, I didn’t want it to wrap up so abruptly.

Resistance (hardcover, 280 pages), by Owen Sheers. Two out of five stars. You know how sometimes, you want something really badly? But you can’t have it, and so it turns into a weird obsession? Like, I must have this thing NOW. And then you FINALLY get it, and it turns out to be…kind of crappy? I really wanted to see the movie version of this story, but it was never released on DVD here in the U.S. After a long time searching for a copy (any copy) of it, I settled for reading the book and imagining the movie in my head. And it was SUCH a letdown! I mean, the story starts out really good, and then it seems like the author loses his way and can’t think of how to keep going or even wrap things up. Ugh.

The Ghost Bride (hardcover, 368 pages), by Yangsze Choo. This was a really strange but interesting historical novel about the practice of marrying a young woman to a deceased bridegroom (you read that right!) to keep him company in the afterlife. While Li Lan is an interesting enough character, the setting–the superstitions, culture, and colorful spirit world–really stole the show. The plot wasn’t really great enough to be a “must-read”, mostly owing to the fact that the “twists and turns” weren’t very shocking; but the narrative was very well-written, so if you like historical fiction with a touch of the paranormal then this is a good pick for a rainy day.

My Last Movie Star: A Novel of Hollywood (hardcover, 368 pages), by Martha Sherrill. Three out of five stars. This was a guilty “sit on the couch all day with tea and a book” read that let me put off working on my homework, hehe. I didn’t know it beforehand, but the main character, starlet Allegra Coleman, was actually invented by the author for a hoax Esquire magazine feature back in 1996. Then-unknown actress and model Ali Larter posed for the feature and ended up launching her career as a result. In the book, Coleman is a rising star with a lot of the quirks and baggage to be expected from a Hollywood movie star; she’s being interviewed on a road trip by Clementine James, a jaded New York journalist, when a car crash leaves Clem in the hospital and Allegra vanished (poof!) into thin air. As American goes into a frenzy over Allegra’s disappearance, Clem becomes famous by proxy, and also begins seeing the ghosts (?) of movie stars past: Gloria Swanson, Natalie Wood, Tallulah Bankhead, and more.

While it was a fun read, some parts of the plot don’t seem to stick together very well, and I personally didn’t find Clem very likable as a protagonist. The novel is mostly about the cult of celebrity, but it’s written in such a juicy “magazine profile” fashion that it doesn’t seem to touch this topic too seriously. That makes it great for shallow, brainless reading–sort of a guilty pleasure, like a tabloid–but I just don’t feel like the book stuck with me after I finished it, if that makes sense.

Hyperbole and a Half: Unfortunate Situations, Flawed Coping Mechanisms, Mayhem, and Other Things That Happened (paperback, 371 pages), by Allie Brosh. Three out of five stars. That cover illustration, by the way, is how I often look after a long workday of interacting with the glorious public. Kidding–I really do love my job. Anyway, I picked up this book after finding Brosh’s work on Pinterest, and even the husband laughed out loud at it. It’s sort of a weird graphic novel/short essay hybrid. Her story about a childhood dentist visit gone bad had me in tears laughing (find it here on her blog).
Nerd Do Well (paperback, 359 pages), by Simon Pegg. Three out of five stars. Em sent me this autobiography of one of my favorite comedians at Christmas. There’s something about British humor that always appeals to me, no matter the mood I’m in, and the fact that Pegg is such a geek is just a bonus. I actually thought this would be more of a comedy book, but it’s more of a true autobiography charting his path to an eventual career in comedy. I would have preferred that he skip the novelette inserts in favor of more anecdotes, but maybe a short book is better than one that’s overstuffed and self-congratulatory? Anyway, it was pretty cool to read about all of the connections between the nerdy things of Pegg’s childhood (like Star Trek) and how they ended up becoming part of his adult career. I can’t imagine how mind-blowing it would be to idolize a show for decades and then help film the movie adaptation of it!
Isa Does It: Amazingly Easy, Wildly Delicious Vegan Recipes for Every Day of the Week (hardcover, 320 pages), by Isa Chandra Moskowtiz. Five out of five stars. Isa does it again, is more like it. Another awesome vegan cookbook for the shelves! I think one of the things I like most about Isa’s recipes is that she doesn’t expect you to be a gourmet chef with expensive tools and ingredients at your disposal. Her recipes really are easy to use. 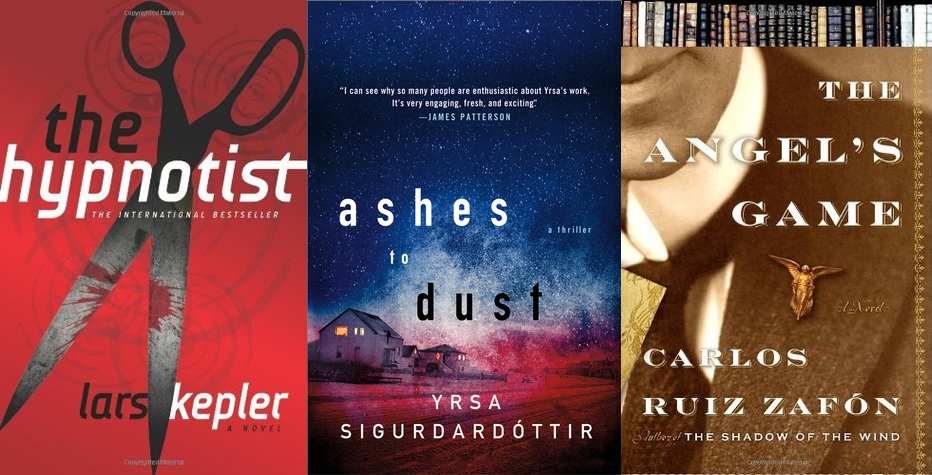 The Hypnotist (hardcover, 503 pages), by Lars Kepler. Three out of five stars. This Swedish thriller was decent, though not great. I liked the way parts of the story were retold multiple times from different POVs–it was an interesting chapter structure that gave incidents a little more depth–but I don’t know if I’d want to read a whole series of novels written in that style.
Ashes to Dust (paperback, 455 pages), by Yrsa Siggurdardottir. Four out of five stars. Katrin sent me this at Christmas and I just finally got to read it at the end of January. This was a pretty dark, macabre thriller. While the protagonist Thora is a lawyer, she tends to play detective for her clients, so don’t get confused and think this is a courtroom novel–it’s a bonafide grisly murder mystery! There are several other novels featuring Thora, but I haven’t gotten around to looking for them yet.

The Angel’s Game (hardcover, 531 pages), by Carlos Ruiz Zafon. Three out of five stars. Last summer I fell in love with The Shadow of the Wind, which was dark, twisted, and very complex in the interwoven layers of its story. This sequel is also pretty dark in places, but it’s not nearly as complex and I felt like the mystery lacked the nail-biting “what will happen next?” quality of the first book. Okay, but nothing you have to read. I’ll still look for the third book in the series though.

The Complete Grimm’s Fairy Tales (Kindle edition). This is nearly 1,000 pages, depending on the version you’re reading. I read portions of this in the first week of my Coursera class, “Fantasy and Science Fiction: The Human Mind, Our Modern World”, and my feelings are mixed: some of the stories seem to have a real hidden meaning, while others didn’t make sense to me. Maybe my critical reading skills need to be sharpened up a bit? (That is, after all, part of the goal of the class!)

Alice in Wonderland (hardcover, 96 pages), by Lewis Carroll. Two out of five stars. I’ve never really cared for this story, though for some reason every thirty-something male I know just adores it. Can someone tell me what’s up with that? Anyway…after re-reading it for class, I felt like it was about a girl having an identity crisis as she grows up and enters the adult world, with its strict “rules” and conformist attitude. That made it feel a little less nonsensical, though I still think Carroll may have been high when he wrote it.

Herland (paperback, 176 pages), by Charlotte Perkins Gilman. Two out of five stars. This is supposed to be a sci-fi novel about a feminist utopia, but I honestly really hated it. For starters, in this “utopia”, motherhood is the highest honor and everything in Herland is centered around being chosen to be a mother. Apparently there’s no room for those of us ladies who don’t like kids! Sex also gets the weird treatment–this could just be my interpretation, but it’s treated almost like a dirty, perverse thing that only men or animals would want. The women act like relationships are better without it. I call BS on that. This might have been the feminist “utopia” way back in 1915, but it sure hasn’t held up well over the ensuring century!

Assorted work from Edgar Allan Poe. Here’s what made this portion of my schoolwork so interesting: Poe turns up as a character in The Map of the Sky, which I read not too long ago. After seeing him as a character in a horror(ish) novel, it was fun to re-read classics like “The Raven” and “The Fall of the House of Usher” and think about how he might have come up with such dark, strange stories.

The Island of Dr. Moreau (paperback, 160 pages), by H.G. Wells. Three out of five stars. This was a good blend of sci-fi and horror, though probably not for those with weak stomachs. I find it really interesting to read Wells’ work after seeing him as the protagonist of The Trilogia Victoriana. He really had his finger on the issue of men who tried to become gods through misuse of science and technology.

Dracula (paperback, 448 pages), by Bram Stoker. Three out of five stars. Can you believe I’ve never read this classic? It ended up being better than I expected. I really liked the character of Dr. Van Helsing, who reminded me a bit of the wonderful Walter Bishop from Fringe. Also, I often skip the scholarly forwards in these classics, but he forward in this book was worth reading–I plan to read Elizabeth Kostova’s The Historian later this month.

So what have you been reading lately? Any recommendations for me? Don’t forget to hook up with me on Goodreads!