Frankenstein, by Mary Shelley (hardcover, 242 pages). Two out of five stars. I couldn’t even finish this book; it was so poorly written, flowery and wordy, dragging and dull. There are some really interesting themes to explore in Frankenstein, and I understand why it was included in my sci-fi lit course, but as casual reading it’s just torture!

The Martian Chronicles, by Ray Bradbury (paperback, 241 pages). Five out of five stars. I wouldn’t call myself a classic sci-fi reader; I just dip into the genre from time to time, and for that reason I’ve never bothered to seek out any fiction from Bradbury. I had to read this book (actually a collection of short vignettes) for class and I loved it. It’s one of the most delicately written, thoughtful, spooky pieces of prose I’ve ever read. I really enjoyed reading this and writing an essay on it, and will probably revisit it in the future.

The Left Hand of Darkness, by Ursula K. Le Guin (hardcover, 218 pages). Three out of five stars. Another lit class selection. This was another piece of hardcore sci-fi, but one I struggled to read. It’s an interesting portrait of friendship on a foreign planet, but for the most part I felt like the narrative really dragged along.

A Princess of Mars, by Edgar Rice Burroughs (paperback, 186 pages). Three out of five stars. I loved the movie John Carter, so going back to the pulp fiction novel that inspired it was kind of interesting. The novel is kind of laughable in that John Carter is so full of swagger and braggadocio, and he excels at everything he puts his hand to in a way that only early pulp fiction novels could perfectly capture. That said, it does contain some interesting themes of of friendship and race and it’s certainly interesting–and short to boot. This was one of the better picks from my lit class. 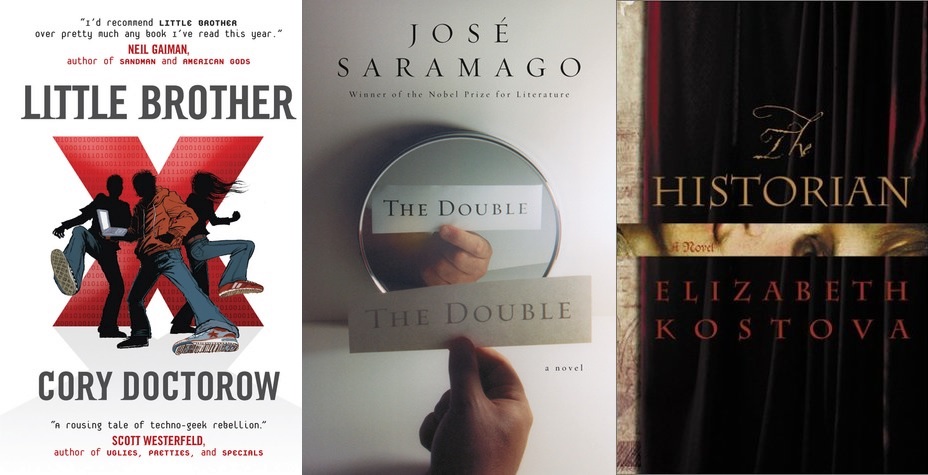 Little Brother, by Cory Doctorow (hardcover, 382 pages). Three out of five stars. This was the final selection for my sci-fi class. So here’s the deal with my rating for this book: content-wise, it’s a five out of five. The nitty gritty of the story involves computer hacking, surveillance and privacy in the digital age, particularly as it relates to illegal government tracking of citizens. I think this is one of those books everyone should read, at least as a jumping-off point for further study. The thing that knocked down my rating was the pretty amateur writing, which was pretty distracting at times. That said, I still think this is one of the best books I’ve read in a long time and would recommend it to anyone who is interested in learning more about the ways in which citizens can protect their freedoms in an increasingly digital world.

The Double, by Jose Saramago (hardcover, 324 pages). Three out of five stars. Another Spanish (Portuguese) author, another weird, weird story. I really liked the plot but struggled with their weird sentence structure, so I would recommend seeing the movie (Enemy) with Jake Gyllenhaal instead of reading the book. Sorry! It was a great plot, it was just so, so hard to read. Basically, a teacher sees his double in a movie, and all sorts of hellishness breaks loose as the two men begin a cat-and-mouse game of identity and deception. The ending was spot-on perfect.

The Historian, by Elizabeth Kostova (hardcover, 642 pages). Two out of five stars. This has to be one of the biggest disappointments of the year. It’s not that the book is bad, per se; it’s well-written in terms of historical detail, the European scenery is described in great detail, the atmosphere is convincingly spooky, etc. etc. etc. But for starters, this book is about 200 pages too long. It drags, and I do mean it drags. On. And on. The many, many overly detailed letters slow things down like you would no believe, and they get old very fast. The book also switches through multiple POVs, but since all of them first-person, it can be confusing trying to tell who is talking and at what point in time you’re supposed to be while they’re telling their portion of the story. (Speaking of which, the characters–not only do they seem very thinly drawn, they do so many things for no apparent reason, or because of “coincidence”. I can only buy that to a certain extent.) The final death blow for this book was the totally anti-climatic ending, which was even more painful considering I had just slogged through 600 pages to reach it.

So what have you read lately? Leave me a comment to let me know, and come friend me on Goodreads too!