I barely read anything at all this month. (I can hear the loud gasps from you all. You know how much I love to read!) Honestly, I don’t even know where the month went. Hopefully next month I’ll spend more time reading and less time doing…whatever it was I was doing this month instead of reading. Because I really don’t know what it was! 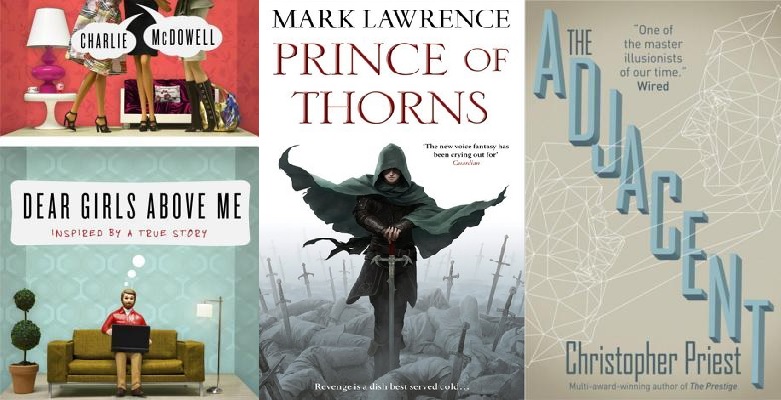 Dear Girls Above Me, by Charlie McDowell (paperback, 288 pages). Two out of five stars. I really wanted to like this book, best described as a lightly humorous beach read, but a few things held me back. For starters, it just isn’t as side-splitting as you’d hope. Secondly, at times I found it really hard to like Charlie; he comes across as a little neurotic and whiny. Finally, you start to kind of feel sorry for these girls; they are humans, after all, and he’s mocking them for a public audience with apparently little remorse. Yeah, they say some dumb stuff, but don’t we all? I think the nail in the coffin is that there really is no plot; he just sort of meanders around with musings about his crappy life, crappy relationship status and crappy everything else, interspersed with tidbits from the girls. It’s okay at first but it turns super-stale about halfway through the book.

Prince of Thorns, by Mark Lawrence (paperback, 319 pages). Two out of five stars. This is the first book in Lawrence’s The Broken Empire trilogy. It was okay, but nothing amazing, though I do intend to finish the rest of the trilogy. Because it concerns a boy who grows up thirsting for revenge, eventually leading him to be a less-than-honorable ruler (as promised in the next two books, at least), it feels almost like a prequel to the main story, so maybe the next two books will be better.

The Adjacent, by Christopher Priest (hardcover, 384 pages). Three out of five stars. This was good but incredibly frustrating; after reading some reviews on Goodreads, I think it would make much more sense if I had read some of Priest’s other novels beforehand. I did see notes of The Prestige (one of my favorites movies) in here, but there were no satisfying wrap-ups or reveals at the end of the book, so I was left feeling a little unsorted over all the loose ends and apparently unconnected plot points.

Honorable mentions: I tried to read Boneshaker, by Cherie Priest, and Steppenwolf, by Herman Hesse, but finished neither. I found Boneshaker to be a little slow to get into the steampunk zombie action so tantalizingly promised on the book jacket, and I just could not get into Steppenwolf, much as I tried.