Better late than never, I’ve got a rundown of the books I read last month. I didn’t read many, mostly because I started several that are still waiting to be finished–so maybe I can wrap those up later this month. 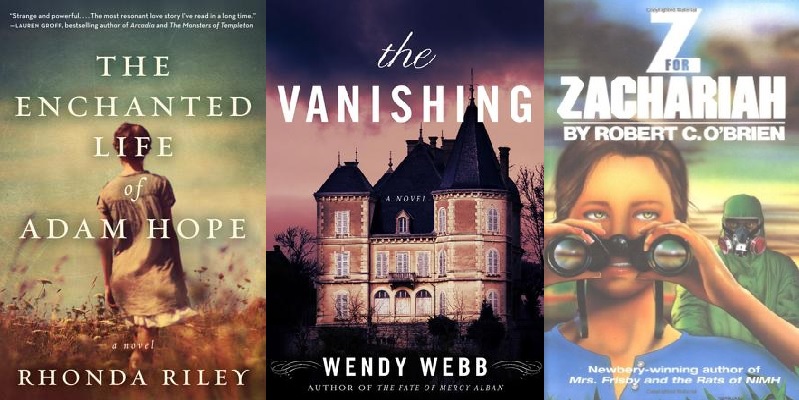 The Enchanted Life of Adam Hope, by Rhonda Riley (paperback, 421 pages). Two out of five stars. This book was a little too strange for my taste, which is saying a lot. I also felt like the writing really dragged in some places, which gave the narration a really stop-and-go feel. Overall it was just okay, but nothing I’d really recommend. The only reason I stuck it out was because I wanted to see what sort of strange ending the author would come up with, but…it was really just kind of ho-hum.

The Vanishing, by Wendy Webb (paperback, 304 pages). Three out of five stars. This started out as a really juicy horror mystery that I couldn’t put down. But the last fifty pages were such a mash of coincidences and hasty writing that it felt like the author ran out of room and said “Oh, shit, I’ve gotta wrap this up!” A fun beach read, though.

Z for Zachariah, by Robert C. O’Brien (paperback, 249 pages). Three out of five stars. This is a bit of a throwback sci-fi entry, very short, very easy to read. I felt like the ending was kind of “open”, if you know what I mean; some readers might feel like it was a non-ending. But overall I liked it.

Grave Mercy (His Fair Assassin #1), by Robin LaFevers (hardcover, 549 pages). Four out of five stars. I’m not gonna lie, I totally picked this up because of the cover, and I was not disappointed. It’s about a girl who joins a convent of assassins, set against the backdrop of Duchess Anne’s attempts to claim her rule over Brittany in the 1490s. I felt like this was a really good blend of action, intrigue, romance and historical fiction.

Dark Triumph (His Fair Assassin #2), by Robin LaFevers (hardcover, 385 pages). Three out of five stars. This wasn’t as good as the first book in the trilogy, but I liked it better than I expected, given that this installment switches over to a new character POV (and I usually hate that tactic). Sadly I have to wait until November for the release of the final book in the trilogy.

The Knife of Never Letting Go (Chaos Walking #1), by Patrick Ness (hardcover, 479 pages). Three out of five stars. This book is really geared more toward 12-15-year-olds, I think, but that’s the risk you run with YA: not all of it is going to carry over to adult bookshelves. Still, it was fairly good, and I do think I’d like to read the rest of the trilogy to see how Todd’s story plays out.

Taken (Taken #1), by Erin Bowman (hardcover, 360 pages). Three out of five stars. This book started out really great, but the second half was way too rushed and felt kind of so-so. I may finish the trilogy later, but I’m not in a terrible hurry.