This was my friend Dan’s favorite song. You can read a little more about what inspired Seether to write this song here. Dan struggled for years with depression and this weekend he committed suicide. I got the news while I was at work on Saturday morning.

He was a funny, kind-hearted, amazing person who made everyone laugh and he’ll be sorely missed by everyone who knew him. I worked with him for about five years and I never once saw him lose his temper or belittle someone. He was always trying to make people smile; even if you were being a grouch he would try to make you laugh and lighten up.

Watching someone you care about struggle with depression is hard. It’s like watching someone drown and knowing there’s nothing you can do. Dan used to be the person who could turn any phrase or situation into a joke. He was bright, energetic and a little wacky. Over time it was like the light went out in his eyes. He became more and more quiet and he didn’t smile. People use the phrase “a shell of their former self” but you don’t realize what that really means until you see it happen to someone you know: the outside looks the same, but the responses are mechanical and the personality you knew has started to flicker and fade, like a candle without enough oxygen.

Allie Brosh from Hyperbole and a Half has a really great two-part post on depression (here and here) that really sums it up well. Depression isn’t necessarily about being sad; it’s just that you don’t feel anything at all. And it’s hard to fix a big hole of nothing. You look at someone and all you get is a blank stare, like there’s nothing behind their eyes.

Suicide.org lists helplines both nationally and for those outside the U.S. If you are thinking about committing suicide or you know someone who has expressed suicidal thoughts, please call and get help. Don’t try to struggle along on your own.

I wish he would have reached out for help. I wish more that one of us would have reached out to him first. Everyone says you can’t look back and think that if only you’d done more, someone could have been saved, but it’s hard to not think that. This is the second person I’ve lost to depression in two years. It’s hard to not imagine all the pain that person must have felt to go to that point. How alone they must have felt. And how terrible it would be to be all alone at the end.

I find this song very comforting. I’m not particularly religious–I suppose I’m a cheerful agnostic–and I don’t claim to know what’s waiting after we die, whether the pain ceases because there’s an afterlife to look forward to or if it ceases because we just cease to exist. But the hopefulness of the lyrics makes me feel at peace. I hope that after failing to find peace in life, he somehow found peace in death. 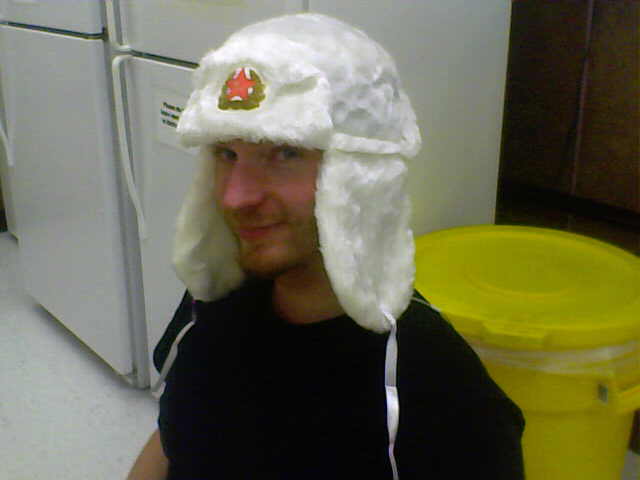 Goofing around at work in better times, Halloween 2011