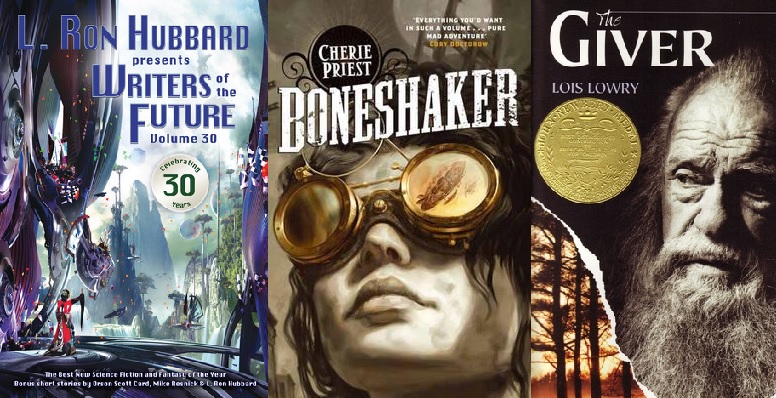 L. Ron Hubbard Presents Writers of the Future Volume 30, by various authors (paperback, 400 pages). Four out of five stars. For starters, I just want to remind people that while Hubbard did go on to found what is arguably one of the zanier modern religions in the world, he was originally a writer of really good classic science fiction–so don’t let his name on the book make you think this is going to have some sort of tie to Scientology; it doesn’t. It’s an anthology of short stories chosen from a yearly contest, and they’re pretty good; they run the gamut from hardcore sci-ti to fantasy to experimental fiction. If you don’t enjoy science fantasy fiction you probably won’t like this but I enjoyed it immensely.

Boneshaker, by Cherie Priest (paperback, 416 pages). Two out of five stars. I tried to read this once before and gave up on it; I picked it up again and managed to finish it, but I still wasn’t that impressed. There’s an interesting twist at the end but for the most part nothing comes as a surprise. And for a steampunk zombie novel, there seemed to be a shortage of both steampunk and zombie elements. Disappointing.

The Giver, by Lois Lowry (paperback, 179 pages). Three out of five stars. A classic that I somehow never read before, and very interesting–I just wasn’t sure what to make of the ending. Also, it was so short and abrupt–I felt like it could have easily run another hundred pages. That said, I would recommend this to anyone. 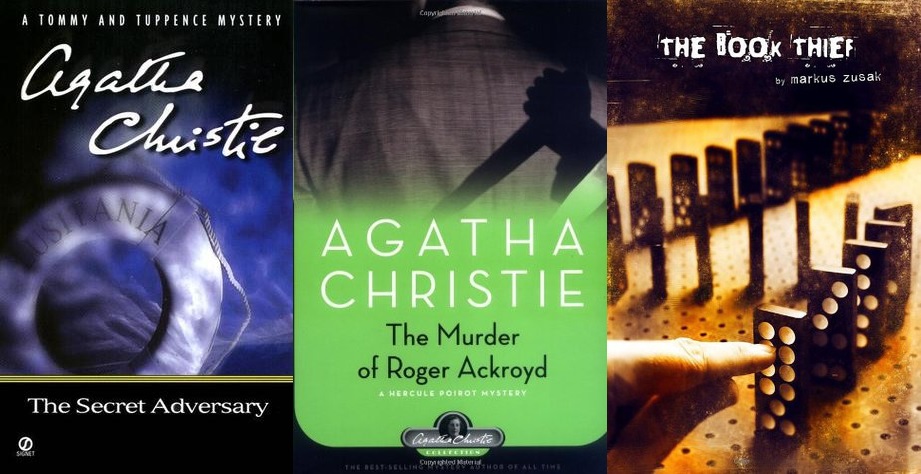 The Secret Adversary, by Agatha Christie (paperback, 242 pages). Three out of five stars. Somehow I just can’t get into the Tommy and Tuppence series of mysteries, of which this is the first. It was okay, and there were a lot of twists, but it didn’t hold my attention the way Marple or Poirot can.

The Murder of Roger Ackroyd, by Agatha Christie (hardcover, 288 pages). Three out of five stars. A Poirot mystery. This one has a really interesting twist at the end. Still, not one of my favorites from Christie.

The Book Thief, by Markus Zusak (hardcover, 552 pages). Five out of five stars. I avoided this book for so long just because everyone and their brother was reading it, and all the hype bored me. Then one of my friends began pestering me to read it, and I did, and I’m so glad–it was amazing. I really like the quirk of using Death as the narrator.

The Art of Happiness, by the Dalai Lama XIV and Howard C. Cutler (hardcover, 336 pages). Five out of five stars. A must-read for anyone. This book is geared to all readers; you don’t have to be a Buddhist or even religious to enjoy it.

I Hate Everyone…Starting With Me, by Joan Rivers (hardcover, 256 pages). One out of five stars. If you think it’s weird to jump from the Dalai Lama to Joan Rivers, you’re right, but the book title caught my attention so I skimmed through it. There are comedians who can talk about people being annoying and get away with it, and then there are people who just cross the line from witty and mean to plain nasty. For example: making fun of children who are bratty or ugly is one thing; making fun of child abuse victims is quite another. Laughing at attention-seekers on reality TV is fine; saying that disabled people use their condition for attention is just wrong.

Under the Banner of Heaven: A Story of Violent Faith, by Jon Krakauer (paperback, 399 pages). Five out of five stars. Mormons will almost certainly not like this book; even some strict religious folks of other faiths (Christianity, etc.) might shy away from it, since Krakauer doesn’t pull any punches in dissecting the flaws of fundamentalist Mormonism and by extension, fundamentalism in any religion. A lot of the practices of the folks mentioned here remind me of my time spent in uber-Christian churches as a kid, where women were lectured at length on modesty, secular music was forbidden, and the general mantra of “don’t ask too many questions” was repeated anytime someone asked something inconvenient.

It’s shocking to me to read about the roots of mainstream Mormon and try to fathom why so many seemingly intelligent people would choose to follow this religion. To his credit, Krakauer lays out the history of Mormonism with as neutral a tone as can be managed when discussing “magical spectacles” and the like. This edition of the book also contains a special afterword discussing the criticisms of the Mormon church leaders against the original manuscript and some of the “flaws” they found in the text. It’s a very well-researched look at the religion and the offshoots of fundamentalist Mormons scattered primarily across the Western United States. If you enjoy nonfiction books covering true crime, religious history or journalistic exposes, then you might like this book.