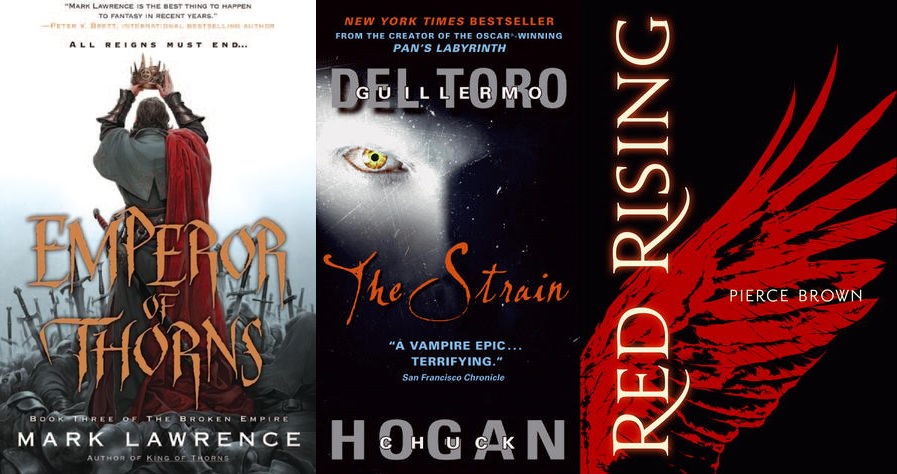 Emperor of Thorns (The Broken Empire #3), by Mark Lawrence (hardcover, 434 pages). Two out of five stars. Worst conclusion to a trilogy I’ve read in a long time, and that’s including the lackluster ending of The Night Angel trilogy.

Here’s the deal: the book itself was really good. We’re wrapping up Jorg’s story, learning more about some of the things that are driving his quest to become Emperor and also more about his enemies. The writing as usual is great. So what kills it? Simply put, out of nowhere the last fifty or so pages of the book take a sudden sharp turn into philosophy about the afterlife and man’s myth of a higher presence and heaven. It was so weird and out of place with the rest of the book that it felt tacked-on.

I also thought the resolution with the Dead King was kind of…well, people will get mad if I say “dumb”. But I was hoping for a kickass Boss Fight, and what I got was so not that and also such a disappointment that it ruined the buildup for me. I know endings are hard, but this was honestly one of the biggest let-downs I’ve ever experienced in a series. It was bad enough to make me feel that I would never recommend this to any of my friends, because why pump yourself up for three books only to end with that? (If you want to see a spoiler for the ending, I’ve posted one on my Goodreads profile.)

The Strain (The Strain Trilogy #1), by Guillermo del Toro and Chuck Hogan (paperback, 585 pages). Four out of five stars. This is a really interesting mash-up of the mythical vampire and the medicinal vampire–that is, vampirism as a virus. It definitely hooks you from the start and keeps you turning the pages. That said, I hope the plot will move a little faster in the next two installments of this trilogy. At times it did feel like a lot was happening without the plot moving forward at all.

I’m also knocking off a star for some of the dumb decisions made by some of the main characters. I know they were necessary for the plot, but they still annoyed me. (Kind of like when you yell at characters in a movie, “DON’T GO THAT WAY! NOOOOO! WHAT ARE YOU DOING?!”)

Red Rising (Red Rising Trilogy #1), by Pierce Brown (hardcover, 382 pages). Did not finish about 1/3 of the way in, but I would give it two out of five stars. A lot of people seem to passionately like this book, and I think they’ll really hate me for saying that I didn’t like it. But I stopped about one-third of the way in and just couldn’t go any further. It took me a while to decide why I wasn’t clicking with this book and then it finally dawned on me: I just didn’t care about Darrow. He seems very cardboard to me. He’s so average as to be bland, and yet he’s so perfect at everything he tries to accomplish. Hmm. Also: the death of his wife, Eo, which is supposed to set him up for his future as a rebel son, has no emotional resonance for me. We meet her so briefly, and Darrow’s memories of her all seem to revolve around her being pretty, so her death just doesn’t touch you the way it ought to.

I don’t think this is a terrible book. Someone else might really like it. I just don’t feel like slogging through it when I have so many other books on my TBR shelf. I might come back at a later date and give it another go, but for now, I’m moving on. 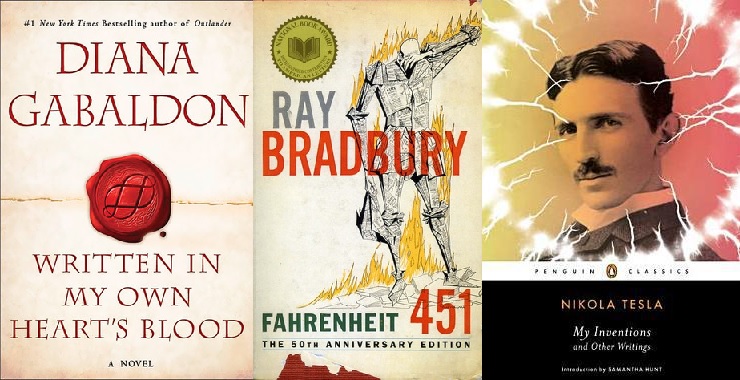 Written in My Own Heart’s Blood (Outlander #8), by Diana Gabaldon (hardcover, 825 pages). Three out of five stars. You can view my GR profile for some spoilers on why I didn’t like this book as much as the previous seven in the series. I waited and waited for the library to call me and say my hold had come in, and then once I picked it up I felt so disappointed, hence the reason I didn’t fly through this as quickly as I thought I would. Don’t get me wrong, Outlander is still totally one of my favorite book series ever…I just feel like this book was padded out a bit more than was really necessary.

First thing that made this book drag a bit for me: I think one of the things that hurt this book was the lack of a sense of peril for certain main characters. Things happened to make you think that they were in danger, but I never really felt that there was a genuine chance we’d lose any of them. It’s not that the writing was poor, the sense of peril just wasn’t there for me.

Second thing that caused me knock off a star: It didn’t feel like the plot moved forward very much. A lot of things were happening, sure. Time moved by. But as far as major plot elements moving forward and new storylines opening up? Just not enough (for me personally, anyway) for an 800-plus page hardcover book. In a way this book reminded me of some sections of A Song of Ice and Fire. Lots of pages and lots of things happening…but the plot is crawling.

Third thing, and then I’ll wrap it up, I promise: Certain storylines seemed to exist merely as padding. At times I felt like some of these subplots existed only to stretch out the word count, or else they were being grossly overstretched with no resolution.

In conclusion, I’m glad I read it, after the cliffhanger ending of the last book. And I’m interested to see where Gabaldon takes her characters in the next book. But this definitely wasn’t my favorite installment in the series.

Fahrenheit 451, by Ray Bradbury (paperback, 159 pages). Four out of five stars. I read this for Banned Books Week (September 21-28). There’s not a lot to say about it that hasn’t already been said. I used to avoid Bradbury because a) I’m not a hardcore sci-fi fan and b) classics are kind of dull, right? Combine the two and I was sure I wouldn’t care for his work. I ended up having to read The Martian Chronicles earlier this year for school and loved it, so when Banned Books Week rolled around this autumn I thought I’d try another Bradbury story–fittingly, one about banned books!

Bradbury writes about socio-political issues like censorship and environmentalism with a graceful lyricism that makes you forget you’re reading science fiction. His imagery is haunting. And as they’re fairly short and easy reads, they don’t feel daunting like some weighty classics that run on for hundreds of pages of tiny print. Total bonus points for that.

My Inventions, by Nikola Tesla (hardcover, 111 pages). Three out of five stars. Tesla has been called everything from a genius to a madman to a wizard, but the truth is unfortunately somewhat less headline-worthy: he was a brilliant but troubled man who suffered from a healthy dash of egotism and an inability to interact with the world in the way society dictates as “normal”.

Reading autobiographies is always a little hit or miss for me. In general people are not the most impartial narrators of their lives, and Tesla is no exception, so parts of his book are a little strange to wade through. On the other hand, as so much material has been written about him, it’s interesting to hear about some of his life and work in his own words, even if you often get the feeling you’re not getting the whole story.

Strange Shores (Inspector Erlendur #11), by Arnaldur Indridason (hardcover, 296 pages). Four out of five stars. I’ve been waiting for some time for the library to get a copy of this book! It was nice to see Erlendur tackle a new case and also wrap up an old one at the same time.

The Absent One (Department Q #2), by Jussi Adler-Olsen (hardcover, 416 pages). Three out of five stars. Carl and Assad are back! I didn’t care for this novel quite as much as The Keeper of Lost Causes because it wasn’t a “whodunit” but more of a “whydunit” or a “howdunit”, and I really prefer whodunits myself. But it was still good.

A Conspiracy of Faith (Department Q #3), by Jussi Adler-Olsen (hardcover, 504 pages). Three out of five stars. This was good, but…a little overlong. I can’t put my finger on why I didn’t care for this book as much as some of the others. I’m going to chalk it up to “people doing stupid things that make you say ‘no, don’t do that!’ but then they do it anyway and suffer” syndrome. There were just too many different characters acting or reacting in ways I found implausible or just plain stupid. Nonetheless, looking forward to the next book in this series.