(Disclosure: I received a copy of the book mentioned in this post in exchange for an honest review. However I was not compensated for writing a review and as always all opinions are my own.) 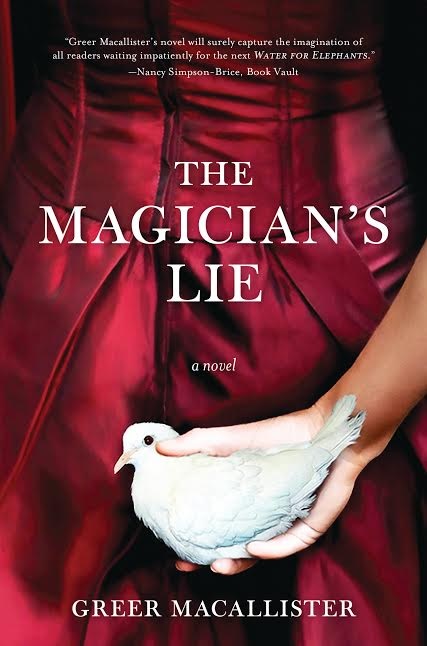 The Magician’s Lie, by Greer Macallister (hardcover, 320 pages). Publication date: January 13, 2015. Preorder it now from Amazon or Barnes & Noble, or add it on Goodreads.

I have only one word to describe this novel: mesmerizing. I would have read it in one sitting if I hadn’t needed to stop for Thanksgiving dinner preparations; once you pick it up it’s very hard to put down, so make sure you’ve blocked out a few hours of free time before you get started.

The novel opens at a crowded theater in Waterloo, Iowa, in 1905. The Amazing Arden is the most famous female illusionist of the early twentieth century, a novelty in a time when women are relegated to the assistant’s role in a magic act. She’s most notorious for The Halved Man, an illusion in which she appears to saw a man in half on stage. Feisty and seductive, she decides to put a last-minute spin on her most famous act by swapping her saw for a fire ax–but when her husband’s body is later found under the stage, it seems that Arden was using the act to disguise an all-too-real murder.

Or was she? Young policeman Virgil Holt saw everything from the audience, so when he encounters the fleeing magician, he immediately takes her into custody, certain of her guilt. But Arden protests her innocence, and as she begins to weave the tale of her life, he realizes that as with her stage act, not everything is as it seems. Arden has a dark and spellbinding story to tell, and as the night unfolds, Virgil becomes less and less certain of the truth. It will take everything he has to decide if her story is true, or just another elaborately crafted illusion.

A lot of glitz and glamour goes into Arden’s stage act, but her life’s story is anything but enchanting. It’s a dark, gritty, and often painful journey from her childhood as Ada Bates to her reinvention as The Amazing Arden. It was difficult to guess how events would play out, and even once I thought I knew what would come next, I ended up getting a surprise in the next pages. Arden is an enchanting storyteller, leading you through the highs and lows of your life so that you’re dying to know what comes next, and holding your breath that her luck will take a turn for the better.

There was one teeny thing that bugged me about the ending of the book, but it’s very spoilerish, so I’m not going to put it in this post–but you can click over to my Goodreads review to see the blacked-out spoiler!

And now for the fun part: Sourcebooks is generously giving away a copy of The Magician’s Lie to one lucky reader! All you have to do to enter is use the Rafflecopter widget below. The giveaway is open to U.S. residents only and will close on December 13th. Good luck!