(Disclosure: I received a copy of this book from Blogging For Books in exchange for an honest review. However I was not compensated for writing a review and as always all opinions are my own.) 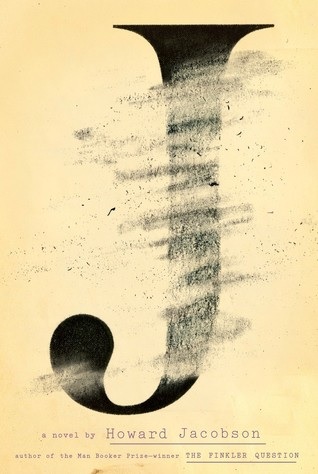 J: A novel, by Howard Jacobson (hardcover, 352 pages). Two out of five stars.

I don’t know how to rate this book–two stars? Two and a half? Should I be generous–three stars? Hmmm. The trouble is that the book by turns interested, irritated and confused me, and I still don’t really know I feel about it.

J is a dystopian novel set in a Britain of indeterminate future, following an event known as What Happened, If It Happened, which has altered the country so much as to be unrecognizable. Frustratingly, we’re only ever teased as to What Happened, but never given any solid hints–it seems to have been some kind of ethnic cleansing or jingoistic warfare, but we can’t be certain. There are hints that it may have been a sort of second Holocaust, but again–we’re never told for sure.

The main narrative arc follows a couple, Kevern and Ailinn, who live in this odd not-quite-dystopia where the past is a dangerous thing not to be discussed or poked into. The goal of the governing body, Ofnow, is to ensure everyone stays peaceable and in the present, rather than focusing on differences or keeping secrets that could lead to conflict. Of course, this constant striving for peace leads to its own fomented angst and secret-keeping, which leads Kevern and Ailinn unawares into all sorts of plots and scheming.

A blurb for this book described it as “1984 meets A Brave New World” but I don’t think that’s correct. While it does have its strong points, the novel is overall not nearly as brutal or as sharp as those other books, nor does it seem to have as clear of a vision in its plot. And the constant forced vagueness starts to get really irksome after a while.

At times the story does a good job of rollings its eyes at too-prevalent political correctness–the need to constantly say “sorry” for everything–and also points out the trouble with refusing to actually take responsibility for the crimes of the past–saying “if” something happened, instead of calling a spade a spade. In a way, considering the possible ethnic conflict at the center of the novel, this is a sharp expose of our tendency to be overly politically correct about race while also downplaying the Jewish Holocaust and the effect of the slave trade and Native American resettlement in America. It’s definitely something that could inspire book club discussions.

Unfortunately these flashes of brilliance are drowned out by wordy passages that might force you to dust off the dictionary. At times the author seems too preoccupied with his own cleverness to move the story along in a linear and well-paced fashion. Instead we’re dragged through a mix of third-person narrative, flashbacks, letters and diary entries, which muddy rather than illuminate the waters. The purposefully vague references to What Happened and also to relics of the past don’t help. After a while you begin to piece together a picture of what might have happened, but it’s less of a sudden realization than a frustrated attempt to force the pieces of a jigsaw puzzle into place.