(Disclosure: I received this book from Blogging For Books in exchange for an honest review. However I was not compensated for writing a review and as always all opinions are my own.) 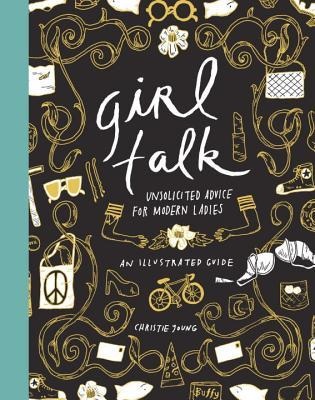 Girl Talk: Unsolicited Advice for Modern Ladies, by Christie Young. Hardcover, 176 pages. Two and a half stars out of five.

The first thing that struck me about this book was that it was frenetically illustrated, giving it the appearance of a doodle-filled spiral notebook. This makes the book kind of cute, but it’s also a bit hard on the eyes. The second thing that struck me was that the author appeared to have been reading a lot of back issues of Glamour and Seventeen and was presenting a sort of mash-up anthology of tidbits of wisdom that might once have appeared in those magazines. The writing style is laid out not so much chapter by chapter, but in little blurbs, charts and sidebars much like you’d find in a magazine. Again: cute, but not always easy on the eyes (or easy to follow).

The third thing that struck me: this book felt wildly unfocused. I felt like the author’s point of view was strangely out of sync with the target audience: a lot of the references would only make sense to someone in their late twenties or early thirties, but the tone of the book makes it feel like it’s aimed at eighteen-year-old girls getting out into the world for the first time. The blurb led me to assume that there would be decently sized chunks of advice, delivered in a witty fashion, yet most of what’s inside is delivered in Twitter-style blurbs and is so “lite” that it doesn’t provide a great deal of insight. A lot of it also felt recycled and not terribly pertinent to a twenty-something–there was nothing here I didn’t already know.

I also scratched my head at the blurb’s list of things the book supposedly addresses, since several seemed to be only mentioned in passing or AWOL altogether. Let’s recap:

You can see, then, how this book frustrated me immensely: I wanted to like it, but I felt like it lacked a solid sense of direction and didn’t live up to it’s promise of being “hysterically funny”. I gleaned no helpful advice from the pages (as I said, most of the “unsolicited advice” was too lightweight for me), and as for the humor, I laughed out loud only twice: once at the anecdote about the seagull and the ham sandwich, and again upon finding the Time Warner logo in the illustrated guide to household pests. (For my non-U.S. readers, I’m sorry if this joke goes over your heads.)

Now, here’s where I tell you that I’m not knocking this book altogether: I think this book might be great as a gift for a younger sister just leaving home, who had little to no clue about living on her own. It’s true that the book isn’t full of in-depth advice for sticky situations, but I can’t actually say I disagreed with any of the pointers given, and there are actually some useful tidbits for a girl just getting out on her own: how to clean an apartment in fifteen minutes before guests arrive; how to handle a breakup; a few quickie/cheapie recipes that aren’t ramen noodles; etc. I’m actually planning on setting this aside for one such young lady who will be eighteen in a couple of years and is planning on moving out to California as soon as her birthday hits; while the advice in the book might be old news to me, I think it’ll actually be helpful to her, and the short-‘n-sweet format will make it palatable for someone who isn’t big on reading.

It doesn’t hit the mark, then, for most twenty- or thirty-something readers who want a funny look at tackling life’s more perplexing social situations, but underneath it all there is a solid baseline of good advice that might appeal to girls in their late teens who are experiencing adulthood anew. Better yet: pair it up with a gift subscription to a mag like Glamour (my personal fave), which gives much more in-depth advice and has some fun fashion and beauty tidbits plus a little news reporting, too. That’s a better dose of girl talk, in my opinion, and it isn’t covered in those headache-inducing cartoons, either.