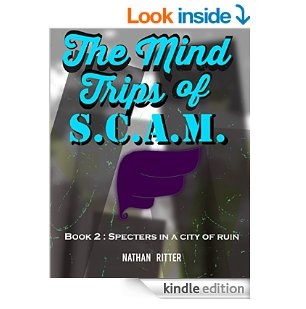 Specters in a City of Ruin (The Mind Trips of SCAM #2), by Nathan Ritter (66 pages, Kindle). Buy it here on Amazon. (Snag it for free until February 1st!)

A couple of weeks ago I gave you guys a review (and an author interview!) of Heroes in a World Reborn, the first in a new series of kids’ books, with a fun twist: the books are meant to be read while listening to classic music albums.  Now the sequel, Specters in a City of Ruin, is available on Amazon–and for a few short days, you can download it for free (so hurry!).

This book is meant to be read to Marvin Gaye’s 1971 album What’s Going On (which you can find here on YouTube). Just a day has passed since Max and Rob went on their first music-fueled adventure and founded S.C.A.M. (the Secret Club of Ancient Music), but they’re eager to go back to Uncle Lou’s and have another adventure.

However, things aren’t going so smoothly for the boys today. For starters, they can’t stop arguing about the rules for their new club. And when they choose a record from Uncle Lou’s stash, instead of a vibrant fantasy world, they find themselves transported to a dead city filled with phantoms and skeletons. What’s happening, and how will they get home?

If you have eight-to-twelve-year-old kids who enjoy fantasy adventures and music, they’ll love this series. The book ends on a bit of a cliffhanger that nicely sets up the third book in the series.

And for those of you who haven’t read the first book in the series, I’m giving away a Kindle copy this week! Just use the Rafflecopter widget below to enter, and don’t forget to download your free copy of book two before Sunday!