(Thanks to NetGalley and Curiosity Quills Press for the ARC!) 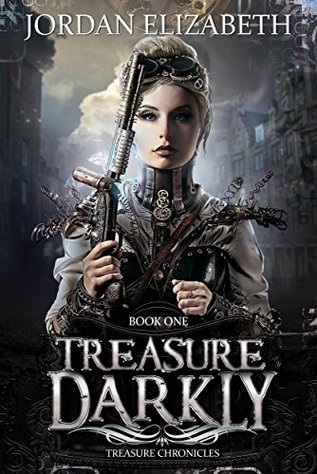 Treasure, Darkly (Treasure Chronicles, book one) by Jordan Elizabeth. Available in paperback, Kindle or ebook format; 289 pages. Three out of five stars. Add it on Goodreads or snag the Kindle edition while it’s on sale on Amazon.

Annnnnndddd…that’s where the three-star rating comes in. Because this wasn’t the worst steampunk novel I’ve ever read; actually, there were quite a few things about it that I enjoyed. But the girl from that gorgeous cover doesn’t really exist in the book (not as far as I can tell, anyway). It’s a steampunk story, to be sure, but it’s primarily a romance, and I was hoping for a little less of that and a little more adventure.

The setting is very reminiscent of Wild Wild West: it’s set in a fictional country much like America in the days of the OK Corral, complete with cities out east and a wild west filled with hostile natives and an army run amok in the mining towns. The setting was very well-drawn and I really enjoyed seeing the steampunk elements against a western desert backdrop, as opposed to a city.

I also felt like the steampunk aspects of the novel were really well-drawn: things were described in detail, so you had a very good idea of how they looked and worked, but the descriptions were never overdone. I especially loved the steampunk clothes, owning more than one corset and pair of ankle boots myself.

The storyline itself is where things faltered a bit. The whole “bringing back the dead” bit was very cool and I expected this to be a wild adventure romp. Unfortunately, once Amethyst Treasure enters the picture, things slide downhill. For starters, the book focuses more on the romance than on the steampunk aspects or the adventures with the dead. (The romance itself, I had trouble getting into.) And when Clark and Amethyst do get around to “adventuring”, everything goes far too smoothly for them. I think the second half of this book was definitely weaker than the first.

My other major problem with this book is that I just didn’t really like Amethyst. She’s spoiled, selfish, and not very useful. I do think her character showed some growth in the story and I’m hoping she’ll grow even more in book two, because I love a feisty steampunk gal–she just didn’t quite cut it for me in this book. I felt like she was too busy flirting and primping to be an action heroine.

So overall, this wasn’t an amazing read, but it was enough to keep me interested and make me want to pick up the sequel when it comes out, if only so I can explore this steampunk world more and see Clark in action again. I think this book would be best for someone who likes romance novels and wants to dip a toe into the steampunk genre; if that’s you, you might enjoy this more than I did. Just don’t read it if you’re expecting tons of action and intrigue, because it’s a little light on those fronts.