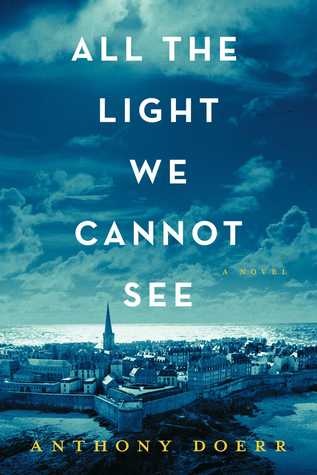 All the Light We Cannot See, by Anthony Doerr (hardcover, 530 pages). Three and a half stars out of five. Thank you to NetGalley for the review copy!

Unpopular opinion time! All the Light We Cannot See is one of those books that is beautifully written, yet somewhat dull to read. Doerr’s story unfolds in aching prose, skipping back and forth through time and multiple POVs, weaving together the fates of a blind French girl named Marie and a young German soldier named Werner. The title is a bit of a scientific reference that also reveals a truth about the characters and stories within the novel: we see only a small part of what is truly occurring, and the rest–the events that shape a person and set them on their path–are invisible to the naked eye. War and history tend to focus on the big picture and gloss over the smaller details, but it’s the smaller details that Doerr brings into focus here: a father’s devotion to his daughter, a young man torn between duty and a stray childhood memory, an old man haunted by ghosts only he can see.

The story moves along at a good clip for the first 200 pages or so, but somewhere around the middle of the novel, things slow down. I think it’s a combination of pacing and the non-linear timeline that ultimately made this book feel slow. At times Doerr seems so focused on capturing the small details of the worlds Marie and Werner occupy that he forgets to advance the story forward. At other times, the skipping back and forth–past, future, past, future–left me frustrated: I know Thing X is going to happen, but now I have to spin back into the past for a poetic day at training school while I wait for those events to (slowly, painstakingly) unfold.

For all that, I certainly wouldn’t call this book boring, by any means. Consider passages like this one:

Werner says, “Where I’m from, they dug up trees. Prehistoric ones.”

Volkheimer says, “I was desperate to leave.”

Bernd molders in the corner. Jutta moves through the world somewhere, watching shadows disentangle themselves from night, watching miners limp past in the dawn. It was enough when Werner was a boy, wasn’t it? A world of wildflowers blooming up through the shapes of rusty cast-off parts. A world of berries and carrot peels and Frau Elena’s fairy tales. Of the sharp smell of tar, and trains passing, and bees humming in the window boxes. String and spit and wire and a voice on the radio offering a loom on which to spin his dreams.

You can’t read that passage and tell me it isn’t exquisitely written, almost dreamlike in quality. And yet, a 500+ page book can’t be sustained on dreamlike prose alone. At times the stories of Marie and Werner almost take a back seat to the prose and that’s when the story starts to feel thin. It’s strongest as in the passage above, when the plot and the prose work together to give you such a strong sense of the events unfolding that you can almost see them in front of you.

I think this is a hard book to review because I have such contradictory feelings about it. On the one hand, as a writer, I appreciate the beauty of the words; on the other hand, as a reader who is often impatient, I felt like there were a few times when I had to put this book and pick up something less dense. If you have the patience to stick it out, I think it’s quite rewarding. I do recommend reading it alongside something else, though, so you can take a break whenever it starts to feel a little too heavy.

Can you still enjoy beautiful writing if a book’s plot unfolds too slowly? I really dithered between a three- and a four-star rating for this book–I was blown away by some passages and bored to death by others!