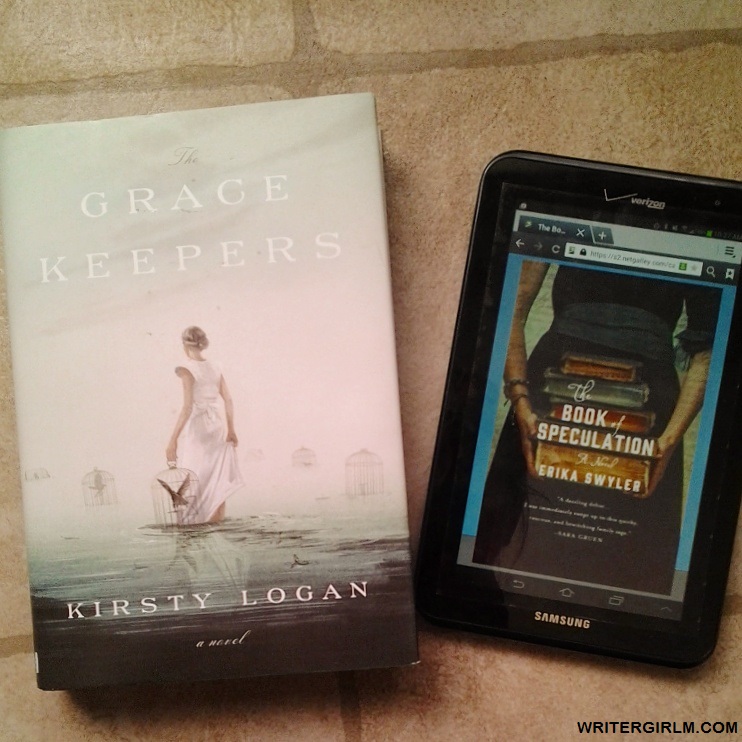 (Disclosure: I received these books from Blogging For Books and NetGalley for honest review.)

I’m starting to think that book blurbs comparing Book A to Book B are a terrible idea. I’ve read several books this year with blurbs that exclaimed “in the spirit of _____!” or “perfect for fans of _____” and eagerly rushed out to pick up the book, thinking, “Ooh, I’ve been waiting for a book like this to come along!” And then…I was disappointed. Massively so, in the case of the two titles I’m reviewing today.

I’m lumping them together in one post, since both were raved about as comparable to The Night Circus, one of my favorite books of all time. But alas: these books are nothing like The Night Circus…not even close. Read on for reviews of The Gracekeepers and The Book of Speculation, and find out why!

The Gracekeepers, by Kirsty Logan (hardcover, 320 pages). Two out of five stars. Add it on Goodreads. I can see where the comparison comes in: a floating circus, young women with secrets, a love story. There’s a touch of folklore about it and also a backdrop of post-apocalyptic fear (a la Station Eleven, which was also name-dropped in comparison). But that’s where the similarities end. I felt like the writing wasn’t nearly so graceful as in either of those two books, and to be honest, I found the plot a little dull. For magical realism to hold my interest, the writing needs to be, well, magical–and that wasn’t the case here. I was kind of bored. I also struggled to connect to any of the characters. By the time the plot wrapped up I so didn’t care anymore–I had avoided DNFing this one in hopes of a really great ending, but it didn’t deliver.

The Book of Speculation, by Erika Swyler (hardcover, 339 pages). Two out of five stars. Add it on Goodreads. This book promised so much, beginning with that gorgeous cover, and I feel so, so let down! It starts out with a very intriguing premise–a family curse, an old book and a deck of tarot cards that connect many different characters over different generations, and a traveling circus full of oddball characters who may or may not have magical abilities. The first part of the book seemed to be setting up a really dark, compelling tale full of magic, mystery, and drama, but just as the story should have been taking off, it fell flat. For starters, the main character, Simon, was so flat and whiny that I found it hard to deal with him. The rest of the book was equally flat and felt labored. Again, I finished it up in hopes of a great ending that would somewhat redeem the middle section, but it didn’t happen.

Have you ever picked up a book on a recommendation and felt utterly let down? Do you get your hopes up when a book is compared to another book you love, or do you know better? (I, apparently, do not!) And can anyone recommend a book similar to The Night Circus that I might really love? Leave me a comment and let me know!