Yay, I’m back to doing my monthly roundups! My reading was pretty hit and miss through spring and summer, with a lot of DNFs and very few books in July, thanks to packing up and moving. But I got back on track last month and really want to get back in the habit of doing these monthly roundups! (If you’re curious about other books I’ve read this year, you can check out my page on Goodreads. I’ve also posted lengthier reviews of most of the books below, if you’re curious.) Now, on to the roundup! 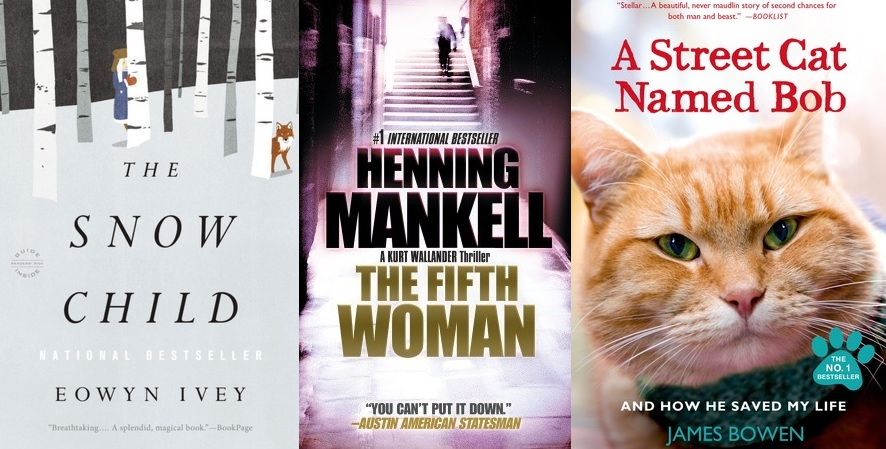 The Snow Child, by Eowyn Ivey (paperback, 390 pages). Five out of five stars. Add it on Goodreads. I have one word for this book: magical. I’m rarely impressed enough with an author to mentally bookmark their name so I can pick up anything and everything I find by them in the future, but Ivey’s gift with a pen has added her to that list; her prose is amazing.

The Fifth Woman (Kurt Wallander #6), by Henning Mankell (paperback, 608 pages). Four out of five stars. Add it on Goodreads. I know, I’m reading this series all out of order! I don’t what it is about the Wallander books but I simply can’t put them down. (Actually, I’ve found this to be true with Scandinavian crime fiction in general–thanks to my friend Katrin for such a pleasant addiction!) I wonder if Mankell wrote this storyline to express his own frustrations with the way violence against women so often slips through the cracks. (You can find lengthier thoughts about this topic in my GR review.)

A Street Cat Named Bob: And How He Saved My Life, by James Bowen (paperback, 320 pages). Five out of five stars. Add it on Goodreads. “Heartwarming” seems like such a cheesy word for a book, but it really fits! Bob reminds me a lot of my tuxie Max, who passed away in May 2015. He too was a street cat who found me at a rough time in my life, and I feel like we saved each other, in a way. So reading about Bob’s adventures made me smile in recognition, even if it brought tears to my eyes once in a while as well.

Luckiest Girl Alive, by Jessica Knoll (hardcover, 352 pages). Three out of five stars. Add it on Goodreads. A lot of people have compared this book to Gone Girl, but I think Pretty Little Liars is a better comparison–the writing isn’t as good as Gillian Flynn’s, and the “chick lit” aura is closer to PLL. This book tackles a lot of tough issues, including rape and school violence, and while the writing is often rocky, I think it’s a book that will really get you thinking. (You can find lengthier thoughts about this topic in my GR review.)

Paradise Lost (Joanna Brady #9), by J.A. Jance (paperback, 432 pages). 3-1/2 out of five stars. Add it on Goodreads. I tore through this, but I wouldn’t say I liked it enough to give it a full fourth star–there were parts of the book that were a little too easy to predict or figure out. Still, if you like crime novels and feisty female investigators, then I think you’ll like Joanna Brady. She’s a redhead through and through!

The Child Garden, by Catriona McPherson (hardcover, 336 pages). Three out of five stars. Add it on Goodreads. I think this is one of those books that would have been a four-star read if not for some small, niggling issues. It was a great mystery and had a creepy setting, thought it wasn’t quite “cozy crime”. But I found the use of nicknames for all the characters to be really confusing, and I had trouble connecting to the main character–she often did things that were dumb or out of character.

The Chemistry of Death (David Hunter #1), by Simon Beckett (paperback, 448 pages). 3-1/2 out of five stars. Add it on Goodreads. This was a good, if slightly gory, British crime thriller, and extremely hard to put down. I knocked off a bit on the rating because the animal violence made me squeamish.

When You Are Engulfed In Flames, by David Sedaris (paperback, 323 pages). Three out of five stars. Add it on Goodreads. Sedaris isn’t, to me, laugh-out-loud funny, but he is lightly amusing. I think his essays might be funnier if you heard someone read them aloud. But c’mon, how could you not at least pick up this book, with that cover and title?

The “meh” and the just plain bad (2 stars or less) 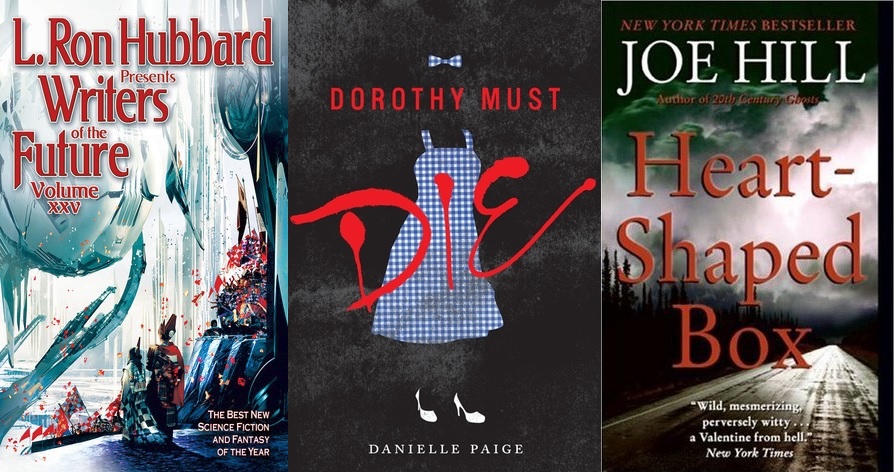 Writers of the Future Volume 25 (paperback, 650 pages). Two out of five stars. Add it on Goodreads. I previously read another volume in this series–anthologies of winning entries from the WotF contest–that I enjoyed much more. This one had some okay stories, but nothing that would make me seek out the authors’ other work.

Dorothy Must Die (Dorothy Must Die #1), by Danielle Paige (paperback, 480 pages). Two out of five stars. Add it on Goodreads. I feel bad DNFing this one, since it was a birthday gift, and I really did like the “horror Oz” concept–but I couldn’t stand Amy Gumm! She was whiny and judgy and–ugh, no. Add a love triangle and I was done.

Heart-Shaped Box, by Joe Hill (paperback, 366 pages). Two out of five stars. Add it on Goodreads. The first half seemed like it was setting up a really spooky story, and then the second half was just…boring. I was promised pants-wetting frights, people! The ride-into-the-sunset ending was the final nail in the coffin: I will not be reading another Hill book, ever. Maybe I expected a little too much from Stephen King’s son, but man, if I was Stephen, I’d be a little embarrassed!