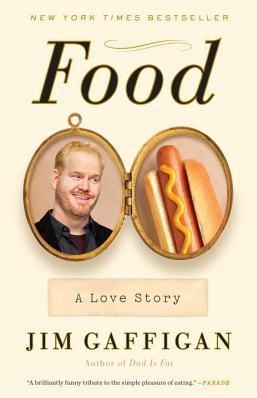 (Thanks to Blogging For Books for the review copy!)

Imagine you see a stand-up comedian and think he’s pretty funny. Imagine he releases a book about, coincidentally, one of your all-time favorite topics–food!–and you salivate as you think “Wow, I can’t wait to read that! I bet it’s going to leave me in stitches!”

Now imagine that when you pick up said book, it turns out to be comprised in part of jokes you’ve already heard from his live routines. Like a day-old salad, this is disappointing, and yet you imagine that surely, no one would sell it if it wasn’t palatable. But furthermore, even those jokes that seemed so funny on stage have lost their luster in print, without inflection, facial expressions or body language to color the tone.

Such is the problem I had with Food, which seemed like it’d be hilarious but ended up feeling kind of stale. Even jokes that I found hilarious live didn’t impress me on the page.

There’s also the basic math problem of a 300+ page book dealing exclusively with one topic. How many topics do you think a comedian chows through in a one-hour special? After a while I had to put the book down because, as much as I love food, my fellow reviewers–I was tired of reading about it. I think this book might be better handled in very small portions, so you can chuckle and then move on to another course.