I was kind of surprised to look back and see how many books I read last month! I had a few good picks but for the most part it was a really “meh” month. Here’s what I loved, liked, and didn’t click with.

The great (four and five stars)

A Death in Belmont, by Sebastian Junger (paperback, 304 pages). Four out of five stars. True crime that reads like fiction is just impossible to put down! I guess I would have liked a more definitive ending, but I still really enjoyed this book.

Abandon, by Blake Crouch (paperback, 521 pages). This near-perfect horror thriller made my Top Ten Tuesday list of creepiest books to read for Halloween. I honestly can’t believe it was over 500 pages long; it felt much speedier!

These Shallow Graves, by Jennifer Donnelly (hardcover, 496 pages). Four out of five stars. I didn’t expect much out of this YA mystery, but I ended up loving the feisty heroine and the forensic details, and tore through it in one sitting. I knocked off one star for a somewhat predictable ending but would highly recommend it nonetheless!

The Blue Fox, by Sjon (paperback, 115 pages). Four out of five stars. This was an unexpected buddy read with my husband for one of his classes, and I ended up really enjoying it. The man vs. nature themes are combined with a dark drama that unfolds with a surprising twist. (Also, it’s set in Iceland, with which I have a mild obsession these days!) 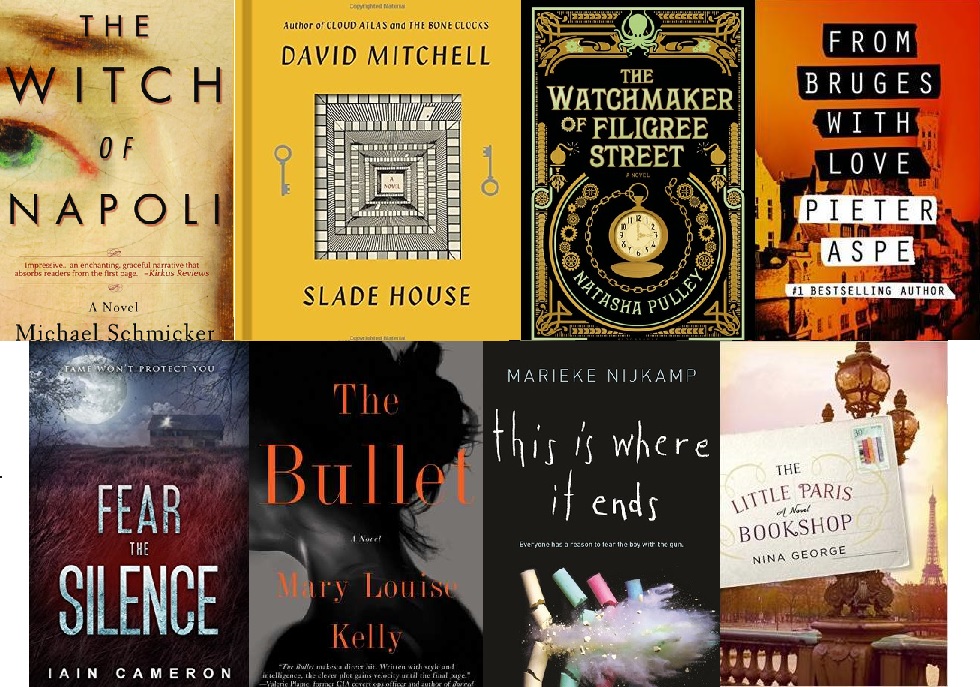 The Witch of Napoli, by Michael Schmicker (Kindle, 294 pages). Three out of five stars. I thought a mystery about a supposed psychic would be really cool, especially since it’s based on a true story, but it was a little dull. In the end I guess it was just okay, but the cover made me think of a Dan Brown book, and it wasn’t nearly as engaging as Brown’s stories.

Slade House, by David Mitchell (hardcover, 238 pages). Three out of five stars. Good, but not quite as cool as The Bone Clocks, and I was hoping it would be longer. For those who are wondering, this serves as a companion to Clocks, but you can certainly read one without the other and not be confused.

The Watchmaker of Filigree Street, by Natasha Pulley (hardcover, 318 pages). Three out of five stars. This novel sounded hugely intriguing, but meandered all over the place and contained some plot twists that just didn’t make sense to me. That said, I added Pulley to my list of newbie authors from whom I’d like to see more work; I feel like she has the potential to write something I’d just adore, if she just polished the rough edges a bit.

From Bruges With Love, by Peter Aspe (paperback, 336 pages). 2.5 out of five stars. A so-so Euro crime thriller. The plot was a little too easy to unravel.

Fear the Silence, by Iain Cameron (Kindle, 361 pages). 2.5 out of five stars. I muddled through this despite mediocre writing and a plot that switched gears midstream.

The Bullet, by Mary Louise Kelly (hardcover, 368 pages). Three out of five stars. I think I expected better plotting from an NPR reporter. This was good, and definitely suspenseful, it just wasn’t great, and I really struggled to connect to the heroine.

This Is Where It Ends, by Marieke Nijkamp (hardcover, 292 pages). 2.5 out of five stars. Much-hyped school shooting drama that ended up feeling very cliched. I’ll give it points for being a fast read, though.

The Little Paris Bookshop, by Nina George (hardcover, 392 pages). DNF at 50%. Three out of five stars. This book is pretty charming—it’s about a bookworm and a writer traveling France in a floating bookshop—and it features lots of food and cats and bookish things, which is awesome. However, I set it aside partway through because it just started to feel saccharine and I was ready for something else.

The “meh” and the just plain bad (two stars or less)

Food: A Love Story, by Jim Gaffigan (paperback, 352 pages). Two out of five stars. This was the first of four books I DNF’d this month (despite having mixed feelings on the subject). You can read a full review, complete with food puns, here. Basically, I just found this book very dry and repetitive.

Wendy Darling: Stars, by Colleen Oakes (paperback 256 pages). One out of five stars. This book was so slow and dry, it literally gave me a headache. I gave up halfway through when I realized it was the start of a series and therefore finishing it would give me no story resolution.

Fast Forward, by Judy Mercer (paperback, 400 pages). Probably two out of five stars. I couldn’t get into this one, and the plot was moving too slow for my taste, so I DNF’d after a few chapters.

Footsteps in the Sky, by Greg Keyes (paperback, 298 pages). One out of five stars. This is basically a mash-up of a space colony plot with ancient Hopi traditions, which sounded pretty cool on paper, but resulted in a jumbled, slow-moving story. I DNF’d after a completely superfluous rape scene and decided I probably won’t be back for any of Keyes’ other work; there’s a lot of potential there but totally flawed execution.

So what did you read this month bookworms? Any recommendations?