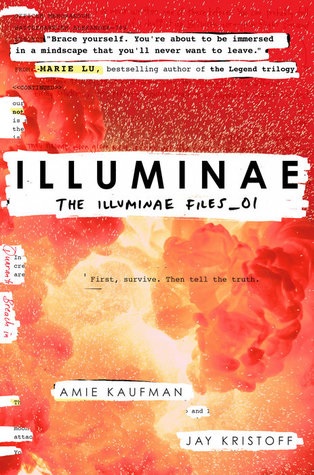 Consider this the book that restored my faith in YA. It was almost a five-star book but I ended up deducting half a star; I’ll explain at the end why I’m taking off half a star.

I initially added this book to my TBR list because so many of my fellow GR readers were giving it the thumbs up and dropping phrases like “teen hackers” and “space zombies”, which, let’s be real, sounded kind of cool. But it wasn’t exactly a book I prioritized, even after I got approved for an ARC from NetGalley. The ARC sat untouched and while I meant to get around to reading it, for some reason, this book just didn’t jump out at me as a “must read very soon” type of title.

I think it’s mostly because of the blurb, which does not do this book justice. It sounds like basically every YA adventure/romance blurb on the back of every much-hyped YA book ever. In other words…snoozefest. But then my husband bought me a copy for Christmas and so I finally sat down to see what the hype was all about. And boy, am I glad I did.

As I said, the blurb doesn’t really do this book justice. The book is compiled as a dossier put together by the mysterious Illuminae and recreates the events that took place on a doomed ship in the far reaches of space. As such, it’s a mish-mash of maps, drawings, narrative transcribed from security camera feeds, emails, chats, interviews, and other random bits and pieces of data. The unusual narrative structure means we have a lot of freedom to move among the ships, checking in with different characters, highlighting different conversations or events, without adhering to a standard chapter format. You might spend a few sentences in one spot and then a very long chunk of the book in another, gleaning a third-person POV of a character’s movements while also learning something about another character.

If it sounds confusing, trust me—it works. It’s also a handy way to recreate the attacks that leveled Ezra and Kady’s home without feeling like it’s dwelling on backstory. (And it lends a comic angle to their breakup and subsequent bickering.)

The story itself is about so much more than Ezra and Kady’s relationship. Fleeing across the stars in a trio of battered ships, only one of which is designed for war, and followed closely by the heavily armed , these teens are just two in thousands of refugees—military personnel, civilians, and scientists alike—suddenly running for their lives. No one is coming to save them; they must save themselves. And as the months crawl forward and everyone begins to show the strain of their situation, things slowly fall apart. There’s a mysterious virus to deal with, an AI that may or may not be fully rational, and warring crews who want to know why their information systems are offline.

As the crews fall apart, Ezra finds himself conscripted as a fighter pilot and Kady decides that she’s going to learn how to hack her way to the truth. Their personal journeys are just two playing out against a mini breakdown of civilization on the ships, and I think the way the authors balance their stories with the bigger picture is great. We definitely get connected to these two as the anchors of the drama, but the book never focuses on them for so long that it turns into an angsty teen love story and loses the sense of pacing and action that’s happening across the rest of the fleet.

Speaking of love, I just love the way it was handled in this book! A lot of YA novels deal with a couple who meet and fall in love during the course of the book and are just instantly equipped to handle all that comes at them in the short duration of their relationship; or worse, the insta-love of strangers. Ezra and Kady have been steady for years; there’s an established relationship here. They work through their problems and reminisce about the good times. They bicker about their differences and learn to work as a team with their differing strengths and weaknesses; neither is the alpha here—they’re equals. You can tell there’s something much deeper than the classic “beautiful boy”/”beautiful girl” deal that currently permeates YA, and I just love the authors for giving us that.

All of this would make for a decent three- or four-star book, and for the first half that’s what it looked like, but then things started happening that made my jaw drop and my mind go “no way! They did not just go there!” I’ve gotten very used to YA that follows the shallow route, so to speak, keeping things clean and nice for the younger readers and avoiding anything too frightening or shocking. This book isn’t afraid to get a little gory, which is awesome, since non-gory zombies just kind of suck. But more than that, it isn’t afraid to look at the very real things that happen in a war: parents die, people make terrible choices, and there’s a lot of death and suckiness all around. After the ‘O Captain, My Captain’ conversation and the airlock flush, I actually sat for a moment in shock and thought “I can’t believe they had the balls.” I feel like a lot of YA books that deal with orphans or with death of any kind try to skirt gently around it—you know it happens, but there’s very little emotional impact. This book deals with it so simply and poetically that it made me close the book for a second and just think.

There was also a plot twist toward the end that was just un-freaking-believable and as it played out I honestly teared up a little. I also felt like there was a sharp spike in the writing in the latter third of the book, when the AI system, AIDEN, takes over much of the narrative. AIDEN may be acting as another POV to show the events on the ship Alexander as they unfold in real time, and it’s true that much of AIDEN’S narrative concerns Kady’s actions, but the prose is simple and weighted with grace as a machine explores what it means to be human. So much of this section of the book is actually about what it means to feel and to love, to have courage, to dream, and to face death, and the juxtaposition of the emotionless AI to these human experiences makes them even sharper.

I would rather be numb than stand here in the light of a sun that can never chase the chill away.

There are so many graceful quotes that come out of this section of the book. I feel like this is the part where it really pulls away from the genre norm of overly described outfits and characters’ eye colors and revels in tragedy and beauty.

Now, I said that even thought I adored this book, and even cried through the last chapters at the glorious plotting and prose, I still had to take off a half star. Here’s why (SPOILER): the very last few pages have a second plot twist that COMPLETELY undoes the amazing plot twist referenced above—the one that made me tear up so bad—and I honestly feel like the book would have been much stronger without it. I get it, the book kicks off a trilogy, but couldn’t we have found other characters to take over books two and three? I don’t like happy endings for the sake of them and this concession to YA formula upsets me not just a little.

So! Altogether, this was easily one of the most amazing YA books, awesome sci-fi books, and flat-out fiction books in general, that I have read in years. I was beyond impressed and aside from having to take off that half star, I couldn’t recommend it highly enough. To be honest I don’t know if I’ll finish the trilogy—I’m a little scared to ruin the glory of this first book—but this book almost feels like a read-alone book anyway, aside from the open ending that paves the way for a sequel, and you’re not left with any huge questions or cliffhangers, so you could totally read this one volume and stop if you wanted to do so.

Illuminae (The Illuminae Files #1), by Amie Kaufman and Jay Kristoff (paperback, 600 pages). Four and a half out of five stars (but nearly perfect!). Genre: YA fiction, science fiction, romance. Find it on Goodreads here and don’t forget to friend me while you’re there!