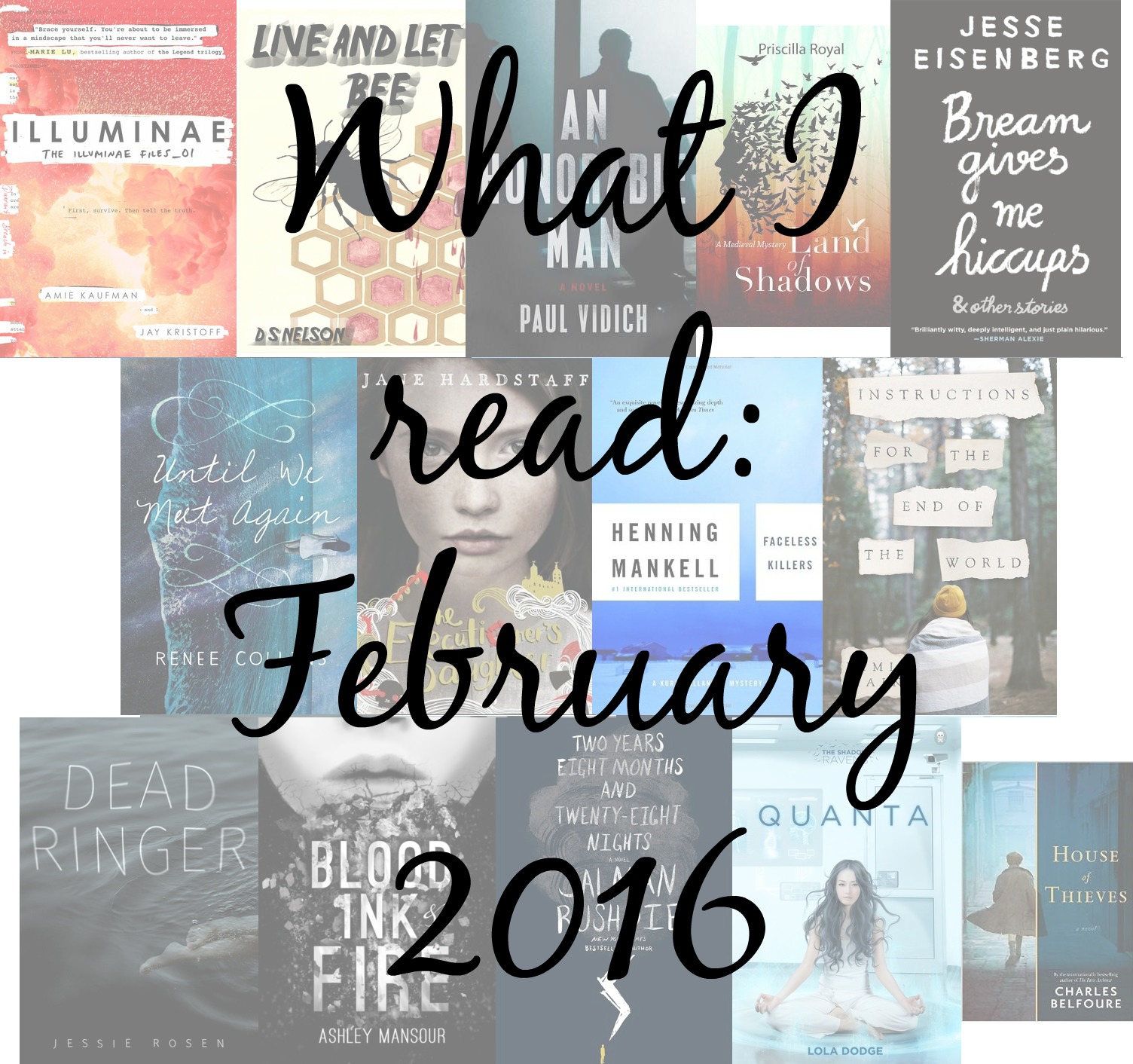 After a few book-light months, I ended up reading a ton in February. Unfortunately it was a mixed bag and included a few DNFs, but overall it was still a much better month than January, December or November. Here’s the good, the bad and the meh of what I read in February 2016. If you want more reviews and bookish chatter, make sure to look me up on Goodreads! I always love making new bookish friends. :) 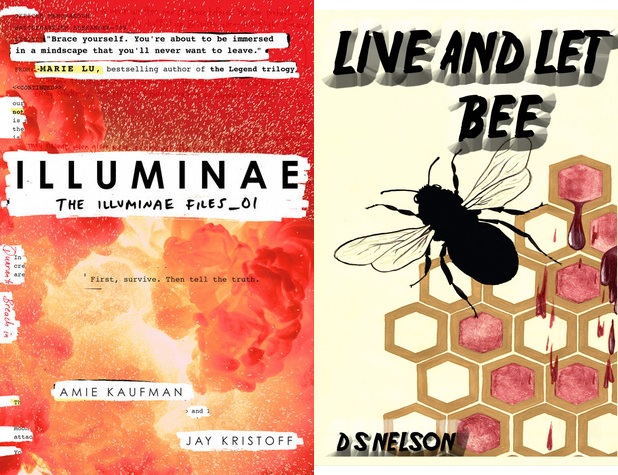 Illuminae, by Amie Kaufman and Jay Kristoff (hardcover, 599 pages). Four and a half out of five stars—nearly perfect! Full review here. AKA the book that renewed my faith in YA!

Live and Let Bee, by D.S. Nelson (paperback, 363 pages). Four out of five stars. Full review here. One of the best mysteries I’ve read in a long time. This series keeps getting better and better. 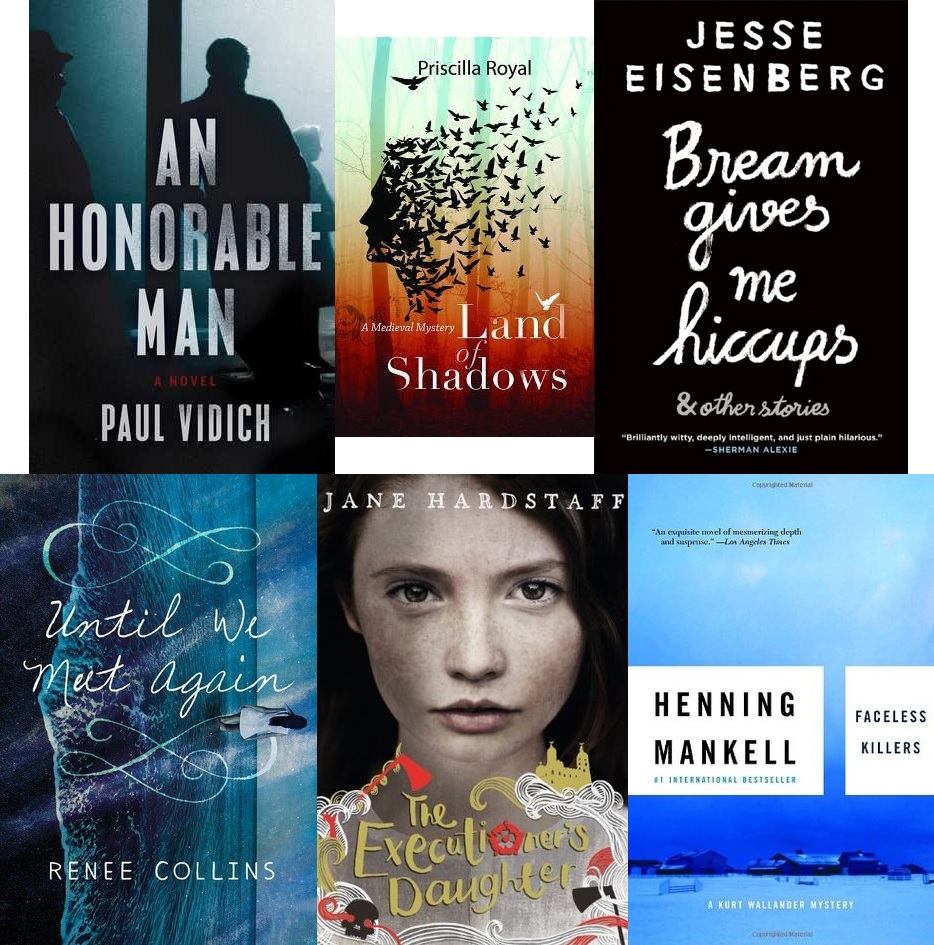 An Honorable Man, by Paul Vidich (hardcover, 288 pages). Three out of five stars. I guess this was okay…I’m not sure what to make of the writing style, which is a little detached, if that makes sense. It’s supposed to be similar to a John le Carre novel but I haven’t read anything from le Carre so I can’t comment on that. This book is due to be published next month if you want to check it out!

Land of Shadows, by Priscilla Royal (Kindle edition). Three out of five stars. This reminded me of the old Brother Cadfael mysteries on PBS. Decent enough, though the writing was a little plain.

Bream Gives Me Hiccups, by Jesse Eisenberg (hardcover, 273 pages). Three and a half out of five stars. I was surprised by how much I enjoyed this essay collection, though obviously some chapters are stronger than others. There’s actually a healthy dose of cynicism and sober self-reflection among the humor. Definitely something I’d read again in the future (select pieces at least), and I don’t say that often.

Until We Meet Again, by Renee Collins (hardcover, 322 pages). Three out of five stars. This was marketed as The Time Traveler’s Wife for teens, and while it’s a little cheesy, it was sweet and fun to read and at least had a decently bittersweet ending, instead of something smarmy and dumb.

The Executioner’s Daughter, by Jane Hardstaff (paperback, 363 pages).  Three out of five stars. This was okay, but I think it’s marketed more to middle-grade kids than teens.

Faceless Killers, by Henning Mankell (paperback, 280 pages). Three and a half out of five stars. Kurt Wallander is one of my favorite Nordic detectives and I’m so bummed that Mankell died and can’t add to the series. :( 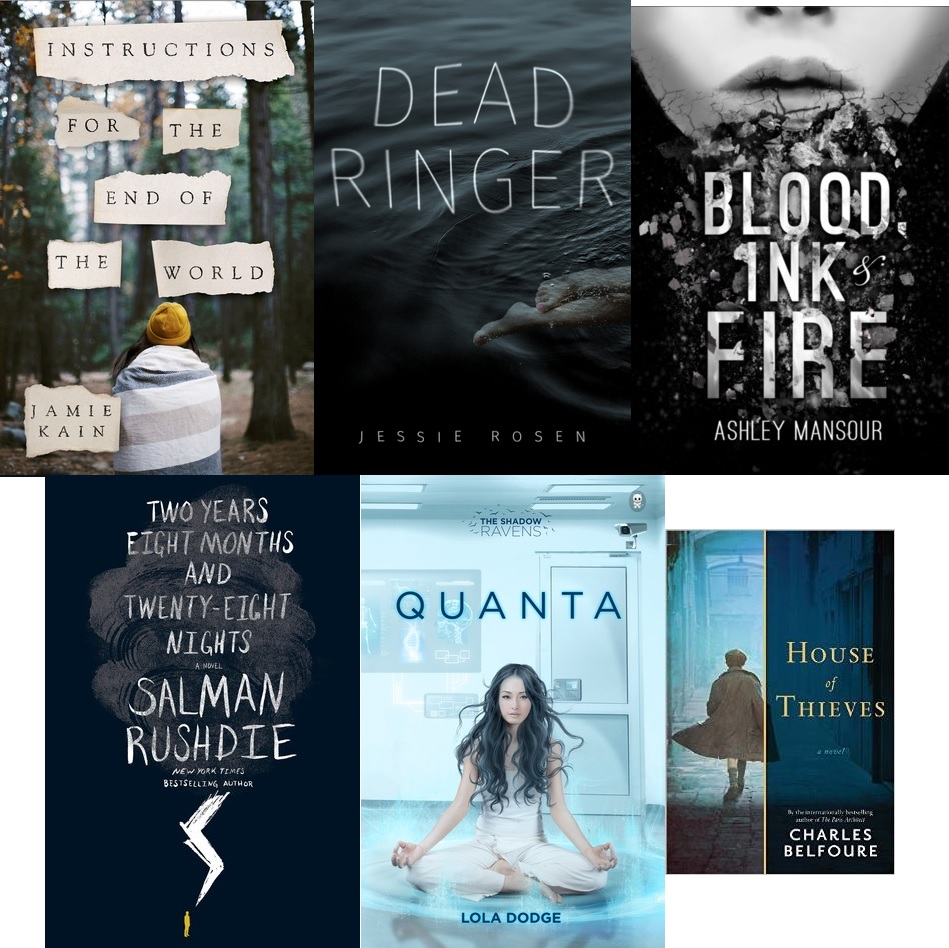 Instructions for the End of the World, by Jamie Kain (hardcover, 214 pages). One big fat star out of five! I almost DNF’d this one but hung on in hopes of redemption. Nope! This was a really big waste of time and had some underlying themes that were never properly addressed, which I found bothersome. I wrote a longer review of this on Goodreads (fair warning, the spoilers may be triggering).

Dead Ringer, by Jessie Rosen (paperback, 322 pages). I had so many problems with the plot of this book, which I discussed on Goodreads, and the overall writing—super amateur—was a turn-off. I think the author was trying to copy Pretty Little Liars and failed miserably. I skimmed the latter half to see if I was right about how the plot would unfold and, surprise surprise, it was exactly what I predicted.

Blood, Ink and Fire, by Ashley Mansour (ebook, 464 pages). A dystopia about a world without books? Should be awesome, right? It had a great premise, but it was soooo boring—I DNF’d pretty quick.

Two Years Eight Months and Twenty-Eight Nights, by Salman Rushdie (hardcover, 304 pages). I’ve never tried to read Rushdie, and I’ve heard this isn’t the best of his books, so maybe I need to give him another chance later. This was just dense and a little dry for me and I DNF’d.

Quanta, by Lola Dodge (paperback, 256 pages). If you were a spy, or a rebel fighting for your life, I doubt you’d have room for half the googly-eyed thoughts Quanta and Tair have about each other. Jeez people. This took the insta-love/love in the time of peril/couple who dislike each other but will obviously be a pair problem waaaaaaay over the top and I DNF’d on principle.

House of Thieves, by Charles Belfoure (hardcover, 413 pages). I wanted to like this, but I couldn’t get past the pedestrian prose, the unlikable main characters, and the historical info-dumps. I got about halfway through and decided I didn’t care if anyone in the book lived or died, so I quit in favor of something better.

So what have you read lately? Any recommendations? (I have to say, I am soooo glad to be caught up on my ARCs from NetGalley so I can start hitting the library again for older titles!) Do you DNF a lot too or am I abnormal? Sometimes I just hit a wall with a book and I can’t go any further—there are too many other books on my TBR list that are more tempting!