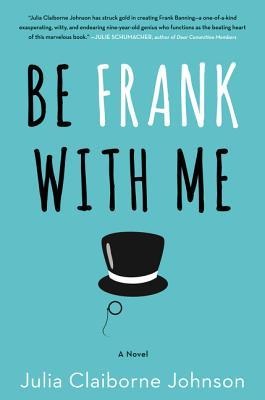 I’ve been looking through my old Goodreads reviews and I’ve noticed that my qualifications for a three-star read seem to fluctuate wildly. Some books are really nicely planned out but slower to read, and others are really fun but kind of fluffy, and then others are hard to put down but don’t seem all that great in hindsight.

It’s just so hard sometimes to say why two books could both be three-star reads when they have such different reasons for landing there, but that’s how it is! Especially lately, I’ve been feeling extra dissatisfied with lots of the books I’ve picked up, and Be Frank With Me was no exception.

It seems like just the sort of book to catch my eye: it involves a writer, it involves oddball characters, it involves a lot of imagination and awkward situations. Alice is the young editorial assistant who is in over her head at her new job: helping a reclusive writer finish her new novel. Desperate for money, the legendary M.M. Banning is working on a new project, and in order to ensure timely delivery, her editor sends young Alice to oil the gears and take care of any issues that arise. The biggest issue: Banning’s son, nine-year-old Frank, who dresses and acts like a character from a 1930s film and proceeds to make Alice’s life a living hell.

This book was a very fast read, and utterly charming, and yet so many things about it bugged me after the fact. Why does Frank dress, speak and act as he does? Children don’t pop out of the womb fully formed, they are a combo of nature and nurture, and he was almost so odd as to seem more like a prop than a person. (Even if he was quite funny and engaging while I was reading.) I didn’t understand why Banning had so much hostility toward Alice and everyone else–maybe it was supposed to be that genetic quirk that was constantly referenced, but it was just never fully explained.

As for Alice, she was by turns likeable and not so much. I felt like the whole thing with her and Xander was kind of dumb and pointless, like there just had to be some kind of romance and he was handily available. I kind of didn’t like him as a character, either–he just wasn’t very compelling and on the whole, seemed like another “quirk” created just because he looked good on paper.

And maybe that’s why Be Frank With Me felt so utterly disappointing after I turned the last page: none of the characters felt real. Sure, they were as fun to look at as an elaborately styled sugar decoration on a cake, but they were so quirky and hollow in their construction as to fall flat the instant you touched them. I think this is one of those books that’s great for a guilty beach read in the summer, because it’s fun and easy to fly through, but I really don’t like quirk for quirk’s sake. At a certain point, it just leaves me with a headache.

Be Frank With  Me, by Julia Claiborne Johnson (hardcover, 287 pages). Published 2016 by William Morrow. Genre: contemporary fiction, chick lit. Three out of five stars. Add it on Goodreads, and don’t forget to follow me while you’re there!