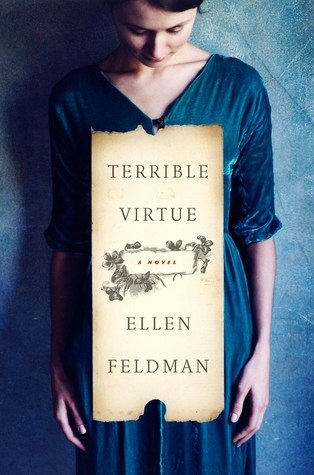 “Fictional autobiography” is a weird term, but it’s the best way to describe Terrible Virtue. It’s a fictionalized account of Margaret Sanger’s life, written from her POV, from her childhood through her work as a birth control advocate. I’m a little embarrassed to admit that I knew very little about Sanger before reading this book, so it was interesting to use this book as a jumping-off point for further research. Unfortunately, while this book was an enjoyable way to ease into biography (never one of my favorite genres), it was lacking in a lot of ways.

It’s true that Margaret Sanger was a driving force in the field of birth control and life as we modern women know it would probably be very different if she hadn’t fought so hard to make contraception a commonplace thing for every woman. It’s interesting that so many people connect Sanger and Planned Parenthood to abortion, since Sanger herself actually was not a big fan of abortion and felt that better contraceptive knowledge would eliminate the need entirely for abortion. She herself was a mother of three and knew the joys of motherhood, but also the downsides.

Given the format of this book, it’s obviously going to have some flaws in how Sanger is presented. I think an afterword might have helped readers in learning more about Sanger (since obviously not everyone will finish the book and then do their own research), because the portrait is pretty one-sided. Much is made of her many possible affairs, but there are a lot of aspects of Sanger’s work that, unsurprisingly, are either glossed over or neglected entirely.

I’m not sure overall what Feldman intended with this book. I don’t think it exactly comes across as a flattering book, because she makes Sanger out to be cold, selfish, and egotistic. But at the same time, as I said above, she glosses over a lot of Sanger’s less laudable attributes. So, kind of not sure what tone or angle Feldman was going for here.

I think Terrible Virtue was great as a starting point for learning more about Sanger because it was entertaining and fast-paced enough that I didn’t get bored, but it definitely had a lot of holes in it, both plot- and character-wise, so I definitely recommend following it up with a little internet browsing so you can learn more about Sanger’s life and work.

At the end of the day her role in bringing birth control to billions of modern women is staggering, and I’m glad she didn’t back down in her fight to allow every woman to make her own decisions about when or even if she will have children. But as with all historical figures, it’s good to separate the (wo)man from the myth and see the human behind the hero worship. You can appreciate and laud someone’s work without conveniently erasing their mistakes in the process.

Terrible Virtue, by Ellen Feldman (hardcover, 272 pages). Published 2016 by Harper. Genre: historical fiction. Three out of five stars. Add it on Goodreads, and don’t forget to follow me while you’re there!