I have a terrible confession to make: I’ve barely read anything for the past several months. It’s partly because I was busy with other activities, and it’s partly because I ran into a slew of real stinkers of books that I just couldn’t bear to finish. I suppose it doesn’t help that I finished reading Dark Matter back in July and promptly fell into a semi-book-depression because nothing seemed nearly as good in comparison.

But I digress! I did manage to finish five books over the past three months and DNF’d two others. (I’m still struggling to read several other books as well that are just not progressing at all.) Here’s what I’ve read lately, along with mini-reviews. For longer reviews, hop over to my Goodreads page, and don’t forget to friend me while you’re there! 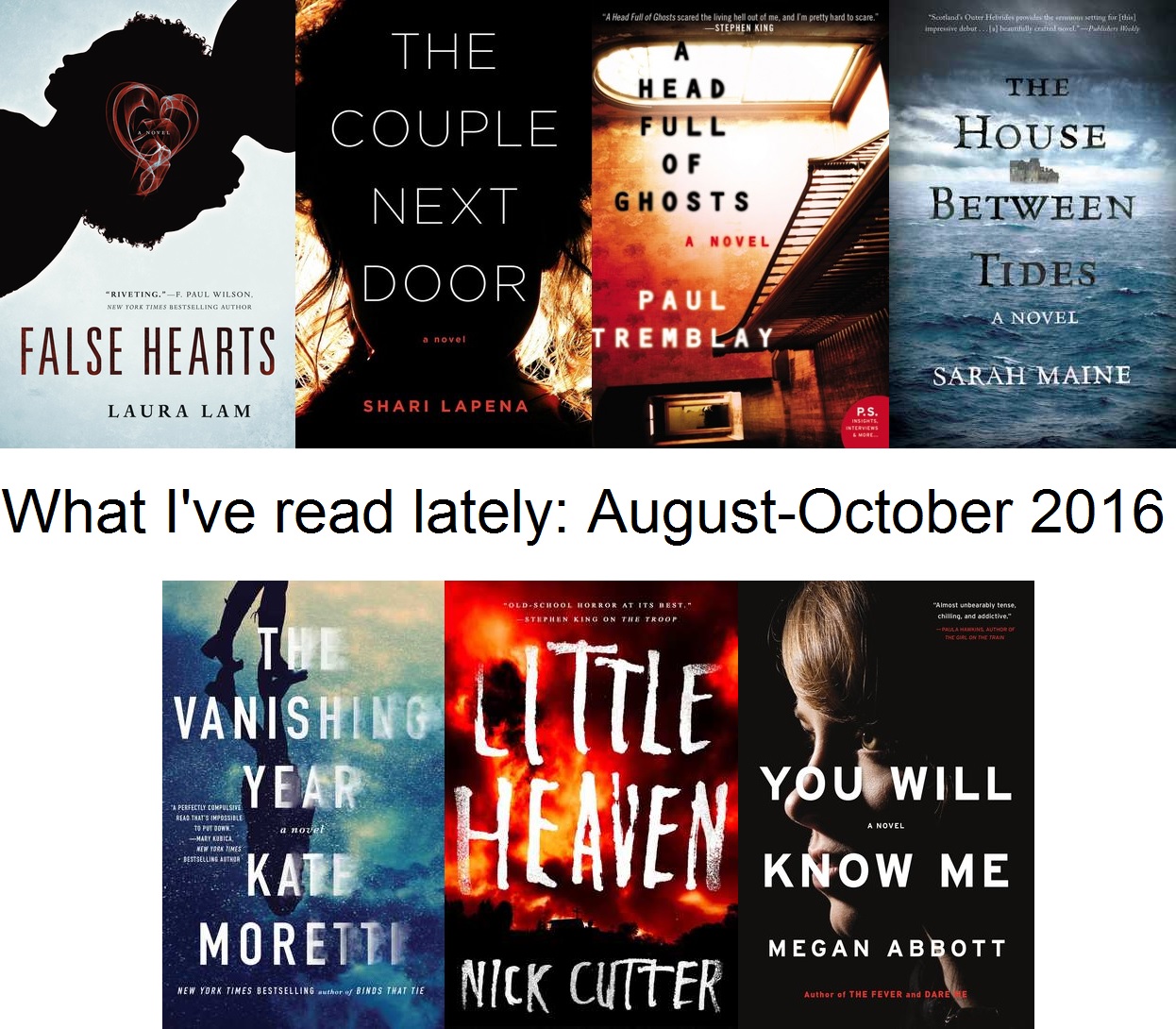 False Hearts, by Laura Lam. Four out of five stars. This was an unexpected delight, a sci-fi novel that was so fluid you couldn’t help but fall into the storyline. It definitely deserved the comparisons to Inception and Orphan Black, though if anything, I hoped it would be a bit weirder.

The Couple Next Door, by Shari Lapena. Three out of five stars. This was an ARC from NetGalley that sounded really good, and really was quite twisty, but just didn’t seem to have the best prose to carry it off. Parts of it were very clunky and I think that ruined the sense of suspense. But if you want twists and turns you won’t see coming, Lapena definitely delivers.

A Head Full of Ghosts, by Paul Tremblay. Three out of five stars. This book was good, it just wasn’t scary. However, as a horror fan and a writer, I really enjoyed the bonus essays + horror recommendations from the author in the appendix.

The House Between Tides, by Sarah Maine. DNF. I downloaded this ARC because it seemed like it might be similar to Kate Morton’s moody mysteries, but the beginning was too dry for me and I gave up. I don’t know if I would revisit this book at another time—maybe I just wasn’t in the right mood for it?

The Vanishing Year, by Kate Moretti. Three out of five stars. I almost DNF’d this one but I’m glad I didn’t—it ended up having some pretty crazy twists in it! With that said, I struggled a lot with the pacing in the first half and also with the overall character motivations and arcs, so I am not giving it a higher rating.

Little Heaven, by Nick Cutter. DNF. I literally threw this one down in a fit. I can’t abide authors who use graphic scenes of animal torture as plot devices instead of, you know, picking their brains for a more creative, subtle way to telegraph evil. It’s lazy and one of the few things I find too morally reprehensible to tolerate in fiction, so henceforth I will not be supporting Mr. Cutter’s work.

You Will Know Me, by Megan Abbott. Three out of five stars. Abbott’s books are odd, because the drama is very compelling, but the writing style…isn’t? This book felt like some version of a draft, and the ending was so abrupt that I thought maybe I was missing a chapter from my ARC. I would still like to check out more of her books, I just don’t know that I would necessarily recommend them.

So as you can see—nothing truly spectacular these past few months, aside from False Hearts, which I highly recommend! What I’ve read lately (October-November) has been mostly ARCs, and I have several in progress on my Kindle, but I just can’t seem to make myself finish any of them. Do you ever have problems with “reading slumps”? What do you do to get out of them? And do you have any book recommendations for me? I could use some!