It’s been months since I linked up for Top Ten Tuesday, and I’ve really missed it. I really enjoy talking about books and seeing what everyone else is reading and recommending!

This week’s prompt is “top ten recommendations for __________”. We’re heading into the last stretch of summer and trying to maximize those last precious days lounging on the beach or in a hammock, soaking up the sun. I know I’m not the only one who loves a good beach read, but since we don’t have much time left to finish those books before school starts up again, I thought I’d round up ten of my favorite short books that can be easily read in one sitting. (This is similar to a prompt I followed earlier this year, but all of these titles are under 300 pages.)

There’s a little something for everyone in this list, from mystery to rom-com to nonfiction. In order by length, here are some of my favorite short books to enjoy this month, whether you’re relaxing poolside, taking a train to a weekend vacay destination, or parked in front of a fan trying to beat the heat!

And Every Morning the Way Home Gets Longer and Longer, by Fredrik Backman (76 pages). The ultimate in short books, this title took me less than an hour to read, but it’s stuck with me ever since. It’s the bittersweet story of an elderly man slowly losing his battle with Alzheimer’s and his struggle to hold on to his memories, while his family struggles to say goodbye. Warning: ugly crying may result.

We Have Always Lived in the Castle, by Shirley Jackson (160 pages). Murder, madness, and visiting relatives: the Blackwood Estate isn’t exactly an idyllic family residence. If you’re looking for literary fiction with a creepy bent, this is it. This was my first introduction to this classic American author and definitely makes me want to read more of her work.

The Body in the Library, by Agatha Christie (191 pages). The prolific Ms. Christie wrote dozens of short books that I could recommend for this list, but this is one of my personal favorites. It’s short and satisfying and a great introduction to this author for those who’ve never read her work.

Hold the Dark, by William Giraldi (203 pages). When a wildlife expert is called into a remote Alaskan village to track a killer wolf, he ends up facing more than just four-legged predators. If Dennis Lehane and Cormac McCcarthy got together to write a book, they might come up with this gritty short thriller, soon to be adapted into a movie starring Alexander Skarsgard.

Wolf in White Van, by John Darnielle (208 pages). Isolated from the real world since the age of seventeen by a disfiguring injury, Sean Phillips spends his days crafting the elaborate world of the Trace Italian, a strategy survival game that ultimately turns deadly for two of its players.

The title is a reference to backmasking and also a clue to the structure of the novel: the story unfolds backwards, with the climax also serving as the starting point of Sean’s story. His time spent shaping the Trace Italian mirrors a real-life narrative about the impact of choices large and small: Does one choice necessarily lead to another, or is each one independently determined? What would have happened if you opted for a different path—would things have turned out differently, or would you have ended up with a similar outcome anyway? This book is short, but it’s one that will keep you thinking long after the last page. 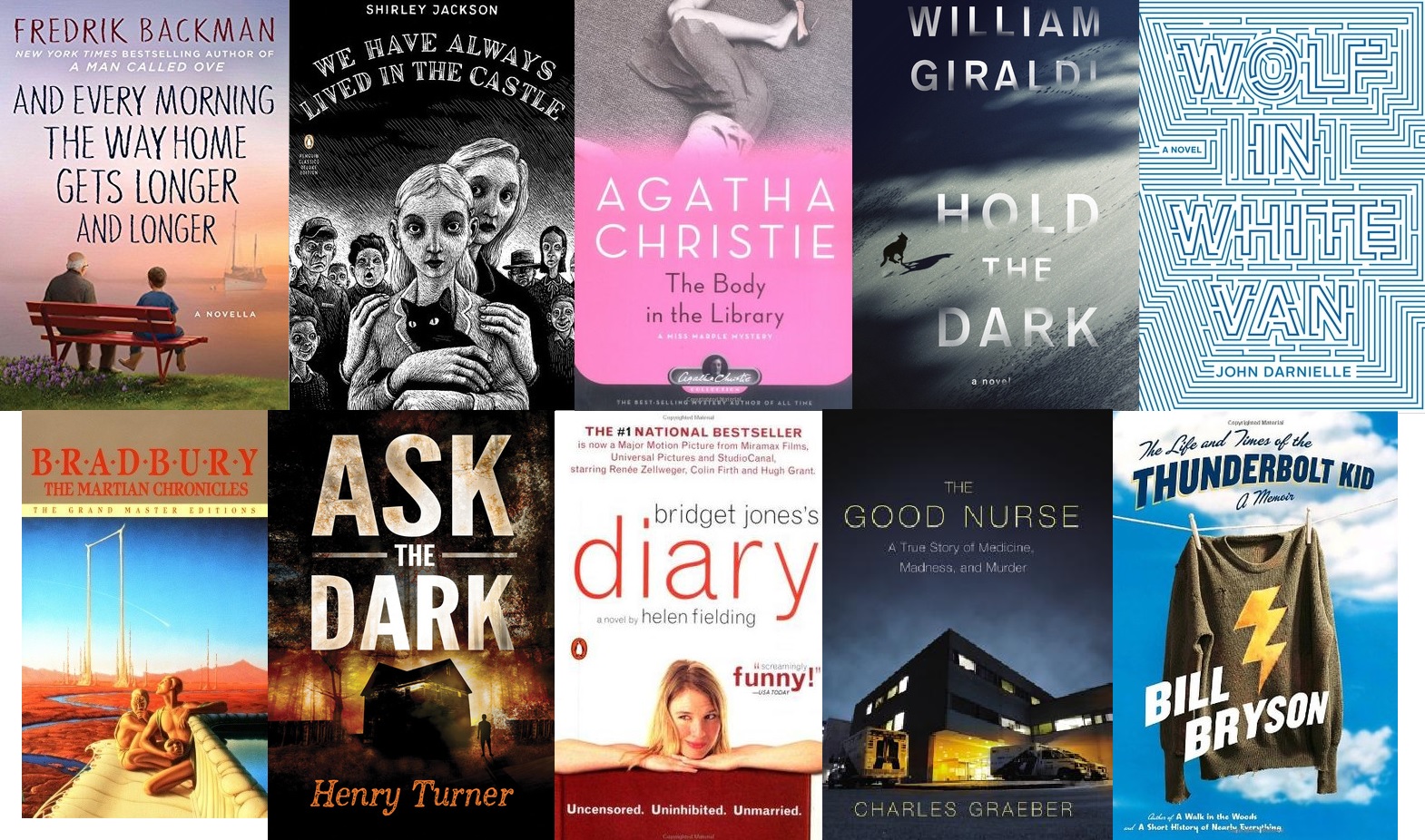 The Martian Chronicles, by Ray Bradbury (241 pages). A series of surprisingly dark interconnected stories that chronicle man’s attempts to colonize Mars, with plenty of nods to the real-world failures of colonization and a subtle warning about ecology. It’s actually less of a sci-fi book than a satire about the way Western civilization looks at foreign culture and is surprisingly poetic even as it’s sad.

Ask the Dark, by Henry Turner (256 pages). A down-on-his-luck teen finds himself on the trail of a killer, but who will believe a kid who’s more of a troublemaker than a hero? Even if you’re not a big fan of YA, you should still give this one a shot, because it’s not really typical of the genre; it’s a lot darker and definitely more suitable for older teens or adults than your average high school freshman.

Bridget Jones’ Diary, by Helen Fielding (271 pages). I think this rom-com is a kind of classic for women of a certain age, but if you’ve somehow not read it yet, you should give it a try. Whether you’re single or one of the “Smug Marrieds”, you’ll probably identify with Bridget’s totally down-to-earth troubles with men, diets, and the attempt to develop inner poise.

The Good Nurse, by Charles Graeber (276 pages). Even if you’re not a huge nonfiction reader, you’ll be hard-pressed to put down this true crime tale of RN Charlie Cullen, dubbed “The Angel of Death” by the media for his role in nearly 300 patient deaths over sixteen years. If you’re not already afraid to set foot in a hospital, you will be by the end of this book.

The Life and Times of the Thunderbolt Kid, by Bill Bryson (288 pages). Bryson remains one of my favorite humor/travel writers; this autobiography is a laugh-out-loud look at his origins growing up in Iowa in the 1950s.

Have you read any of these titles? What did you think of them? What are your favorite short books to blow through in one sitting? I’d love your recommendations!