Happy Top Ten Tuesday! Which, by the way, I’ve missed out on for for-ev-er. Terrible of me, I know, but blogging (and reading! gasp!) took a backseat this summer while I adjusted to a brand-new job and continued makeover projects on the new house. It’s been a busy season for sure, but I’m going to try to get back into this weekly linkup, since I really do miss it!

Top Ten Tuesday is now hosted by That Artsy Reader Girl. This week we’re talking the much-loved, uber popular books that actually live up to their hype. I can think of quite a few that I’ve seen greatly hyped on Goodreads or in magazines but these are the ten that came to mind as totally deserving of all those starry reviews (and possibly, if life ever settles down, of a second reading!). Read on after the jump!

The Hunger Games, by Suzanne Collins: I know that anytime someone includes THG on a “best popular books evah” list a LOT of people get angry because they feel it’s overrated, but you can’t deny it gets hype for good reason. And personally, this is one of the books that got me excited about YA. I devoured it, I loved the movie, and I’ll likely reread it again in the future. I love that Katniss is badass but also flawed, and quite frankly, I love that she doesn’t spend all her time swanning around thinking about a boy. I’m kind of over heroines who only think about their love interests when they should be practicing their shooting!

Gone Girl, by Gillian Flynn: This book got soooooooo much hype in reviews, all of which were hopelessly enigmatic about the plot, that when I finally picked it up I expected massive disappointment. Instead I ended up reading the whole thing in one sitting, and now I’m a Flynn fan for life. By now I’m sure there’s not a soul left alive who doesn’t know the plot twist in the book, but if you don’t, and still haven’t read it, pick it up, because holy crap is it gonna blow your mind. (Also: Flynn has that lyrical ability to put down words on the page in such a way that you’re immediately sucked in. It’s a thick book but feels like nothing at all to plow through.)

The Book Thief, by Markus Zusak: I heard so many positive reviews for this book that I kind of put off reading it. Honestly, it couldn’t be that good, could it? Once again, when I finally picked it up, I was amazed by the writing. Oh, did I mention the entire book is narrated by Death himself?

Game of Thrones, by George R.R. Martin: Disclaimer: I’m not a fan of the HBO show. I also dropped off reading this series midway when it became apparent Martin has little interest in finishing it before he dies, so I’m not necessarily a big series fan or anything.

But I do have to say that this is one of those books that took so long for me to really get into, yet once I did, I was hooked, and I do hope a miracle happens and Martin whips out the last books in the series for us. The scale of it puts so many other “epic” fantasies to shame, and I loved the rich characters, so many of whom were truly neither good nor evil, but complex in all the best ways (like Tyrion, one of my fave literary characters ever). Also, the kickass females! Arya and Daenerys and Brienne, oh my!

The Girl With the Dragon Tattoo, by Stieg Larsson: Honestly it wasn’t the extreme hype surrounding these books that put me off, but some of the thematic elements, which I thought might be a little difficult to stomach. This is a very dark trilogy, but it was the gateway into my favorite crime genre, Nordic noir, and has one of the best female protagonists to date in any book I’ve read. Lisbeth Salander is proof that women aren’t heroines because they’re flawless, but rather with all of their flaws and downsides included. 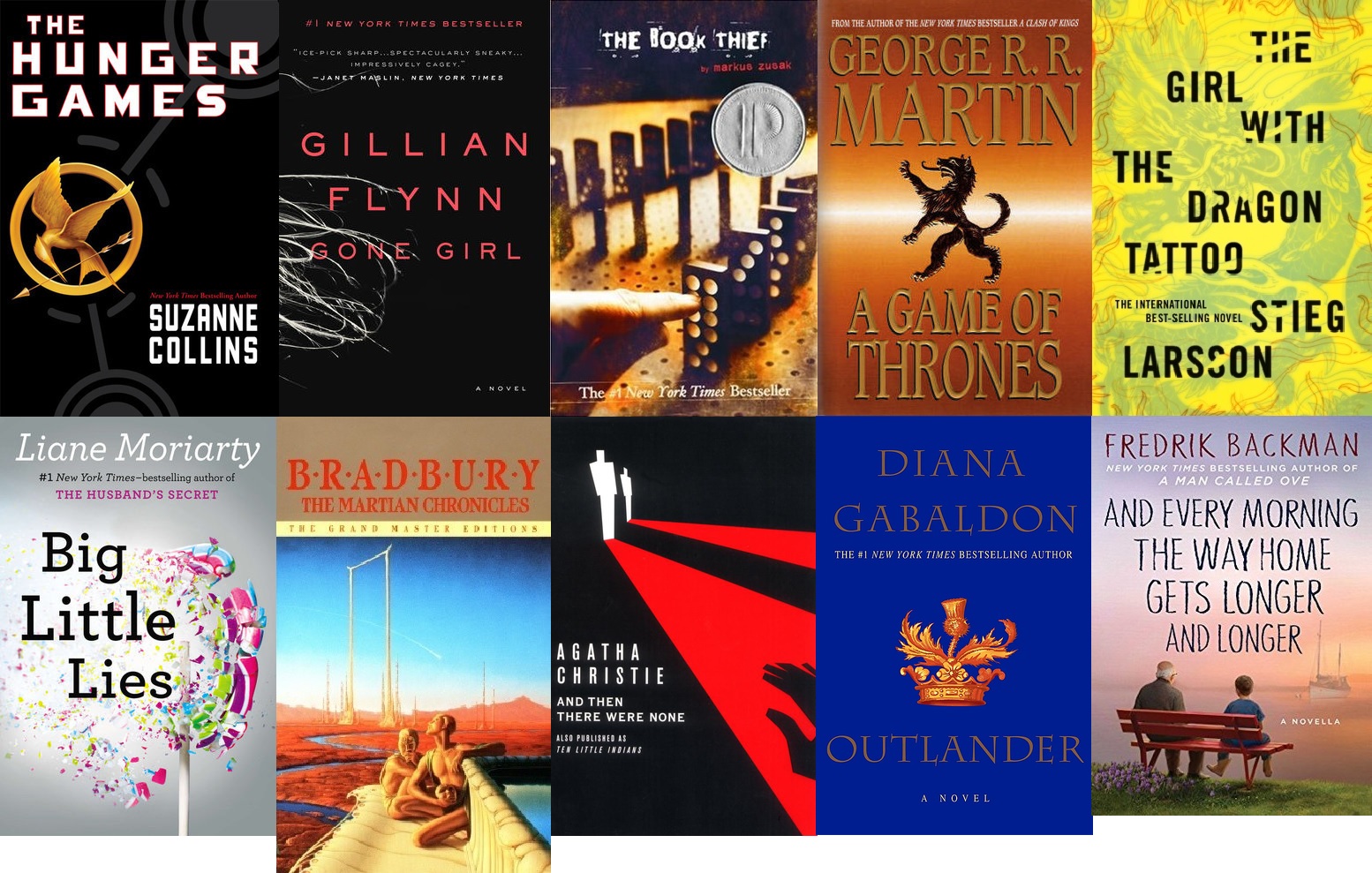 Big Little Lies, by Liane Moriarty: This is another book that was thematically difficult for me to read, but so very difficult to put down. (It was also made into a binge-worthy HBO show with Reese Witherspoon, Nicole Kidman, and Shailene Woodley.) The word “juicy” doesn’t even begin to describe it, yet the book also covers some pretty serious topics about relationships, female friendship, and all the different ways we lie to ourselves and each other, either in malice or out of an attempt to protect.

The Martian Chronicles, by Ray Bradbury: I avoided “classic” sci-fi for a long time because a) I didn’t see how it could live up to the splashy modern tales and b) I thought a lot of it would just honestly feel dated. I don’t think I realized until I picked up this interwoven story collection for a literature class that sci-fi could actually be—dare I say it—poetic. There’s a stream of consciousness in this tiny volume that doesn’t feel dated at all, and now I only regret that I didn’t give Bradbury a try sooner.

And Then There Were None, by Agatha Christie: Dame Christie herself gets a lot of hype, but for the sake of this list I’m going with this 1939 classic, which is not only Christie’s best-selling book but also the best-selling mystery novel in the world. (How’s that for hype?!) It’s slim enough to read in a day and yet packs a huge punch.

Outlander, by Diana Gabaldon: I haven’t watched the Starz TV adaptation for fear of spoiling these novels. (Okay, yes, I’m one of those people.) One of my friends got me utterly hooked on the series, which is the perfect blend of historical drama, mystery, romance, and adventure, with time travel thrown in for good measure. Really, how can you resist? I’ve read a few other books that definitely drew inspiration from this one but they were no match.

And Every Morning the Way Home Gets Longer and Longer, by Fredrik Backman: I’ve heard rave reviews for Backman for some time, but this the first book of his that I picked up, and what an introduction it was! Backman packs more heart into this slim novella than I’d think possible. Fair warning: you may cry while reading.

What books do you feel deserve the hype they received? Or, alternatively, which hype-hype-hooray books have you not yet read, but have high hopes for? Any to recommend to me? Or any books I’ve listed here that you didn’t love?! Let’s discuss in the comments!