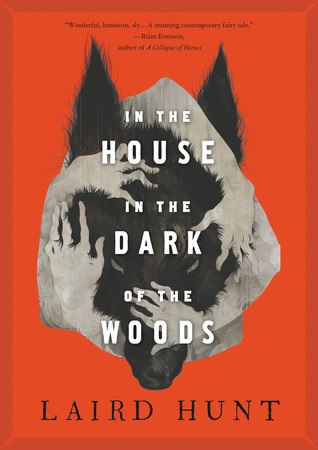 I think that In the House in the Dark of the Woods is one of those books that people will either rate very lowly (and possibly shelve as DNF), because they find it too weird and nonsensical; or rate very highly, and write long reviews praising the genius of the author in crafting it.

God, did I want to love this book. I mean, just look at that cover! I’m somewhere in the middle, though, at two and a half stars. I did actually finish the book at least, though this is partly due to the fact that it’s so short. But throughout, and afterward, I kept saying “What the hell did I just read?”

To say that In the House… is a weird book is an understatement. Summed up in a sentence, it’s about a young woman who walks into the woods in Puritan New England and finds herself in the company of witches. But that doesn’t explain all of the bizarre things that happen once she does: flying ships made of bones, children that come bearing strange gifts, forests that seem to change as she walks through them.

Taken literally, it’s basically a grown-up embellishment of the horror stories that were probably passed around Puritan America back in the day as a way to frighten and subdue people. Do all of the weird and impossible things that happen in the story actually occur? Does it matter, as long as you’re sufficiently frightened to avoid witches, or women who just seem like they might be witches?

Interestingly, at the same time as I finished In the House, Vulture published an article titled “Horror Is Not Defined by What Scares You” (linked here). The point of the article is that a horror story doesn’t necessarily have to be full of jump scares or make you lie awake all night in terror; it can be plenty horrifying just by exploring what the characters fear, how fear shapes their culture, and how this impacts their response to the events unfolding around them.

For Puritans, who saw the world through the black and white lens of the Bible, suddenly marooned in a strange and wild new world, it wasn’t hard to imagine evil dressing up and playing an enchanting tune to lure you into devil worship. It was a pretty small leap forward to tales of witches who stalked the woods at night, who shoved you in wells and fed on children kept chained in the basement.

Taken another way, In the House seems like a bit of an allegory of mentalities that, sadly, didn’t completely die out with the Puritans. It also explains some of the weirder parts of the book. Goody doesn’t get a real name, she’s denoted only by her role as wife and mother, the only acceptable positions for a Puritan woman. It’s possible the women she encounters in the woods are witches, but it’s also possible they only seem like witches because they don’t conform to the standard for a “good” woman; they read and write, they live alone, they study herbs, and so on. (Basically, they have the gall to think and make decisions. Gasp!)

This would also explain why the characters seem to shift places and share roles as the book goes on.

They all began at some point as Goodwife, then broke away to become Eliza. Eliza later becomes Jane, and Jane becomes Granny. There’s probably a murky point in there about how the choices you make and the things that you embrace can later turn into a different kind of bondage, as all of the women discover. And then there’s the fact that for all the horror, fear and darkness the settlers feel toward the woods, toward strangers, and toward the fairytales of witches deep in the forest, the truest evil often lives much closer to home, and wears a more benign face. It comes in the form of abuse, jealousy, and spite.

Either way, for its short length, its a book that seems to ramble on at times for no apparent reason. I’m still not entirely sure of the point of the story, if it’s meant to be taken literally or figuratively. I guess my recommendation is, if you like bizarre stories and are willing to keep an open mind, give it a try. If you like stories that are straightforward and don’t require a lot of thinking and guessing, read something else.

In the House in the Dark of the Woods, by Laird Hunt (2018, 218 pages). Horror, historical fiction, magical realism, suspense. Two and a half out of five stars. Find it on Goodreads and remember to follow me while you’re there!