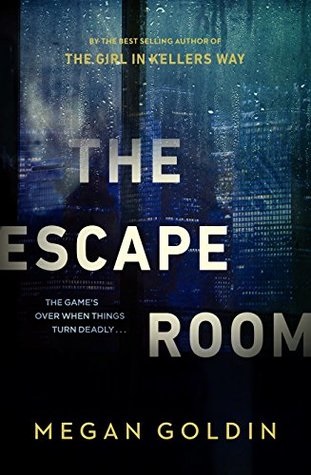 The Escape Room intrigued me because of the premise: four hotshot investment bankers are lured to an abandoned office complex under the premise of participating in a team-building “escape room” exercise. Instead, they’re locked in an elevator, where clues and hints about their pasts create an atmosphere of suspicion.

Who among them knows more than they’re letting on? Is it Vincent, alpha male and full of secrets? Sylvie, bitter over the unfair assessment of her worth versus that of her male peers? Or could it be Sam or Jules, both cash-strapped and desperate to outshine the competition in a season of small bonuses and large layoffs?

And what does their plight have to do with a long-gone colleague named Sara, whose POV is intercut with the elevator scenes?

The plot and pacing made it hard to put this book down. There were so many secrets, lies and admissions cropping up that it felt much shorter than 400 pages. So, why only three stars?

Well, I’m knocking off one star because I felt like the book needed a solid edit. The writing was clunky and just felt more like a rough second draft than a finished proof. For example, I lost track of how many times we hear that the four captives are opening the elevator doors to get some air. The lack of polish was a bit of a stumbling block to an otherwise good story.

The other star gets knocked off because by the end of the book, I realized that I didn’t connect with any of the characters, even the “good” ones. It isn’t just that I didn’t like them; I didn’t feel like they really had enough depth to make me empathize with them. Sara’s POV felt wooden and even as she struggles with her backstabbing colleagues, I found it hard to really feel anything for her situation. The lack of character development left me feeling a little hollow by the last page.

Overall: a good thriller, though not great. It’s Goldin’s sophomore effort, so hopefully further novels will show a little more polish and move her books from three stars to four.

The Escape Room, by Megan Goldin (2018, 368 pages). Suspense, thriller. Three out of five stars. Find it on Goodreads and don’t forget to follow me while you’re there for more book updates and reviews!

Enjoy thrillers? You may also enjoy: