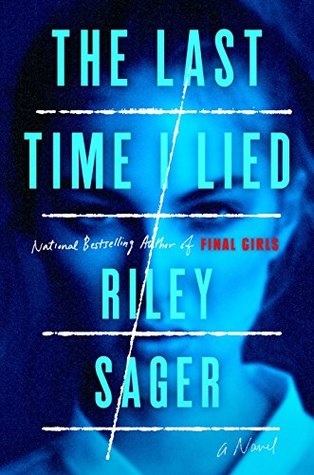 “The time for lies is over.”

I absolutely love unreliable narrators. It’s fun retracing my steps to see all the ways they fooled me, the reader. I love guessing at whether they’re being truthful and if not, whether they even realize as much. It adds a delightful layer of mystery to a standard whodunit and increases the tension as I try to decide if I should in fact be suspicious of the hero/ine, rather than cheering them on.

The Last Time I Lied uses the concept of an unreliable narrator to further the drama surrounding an unsolved disappearance as murky as the waters of the lake at Camp Nightingale, where a trio of teen girls vanishes without a trace. The last person to see them is thirteen-year-old Emma Davis, who watches the girls tiptoe out of their shared cabin late one night, never to return.

Fifteen years later, Emma—now a breakout darling in the art world—returns to Camp Nightingale as a painting instructor at the behest of the owners. But what are their hidden motives for inviting her to return? Emma certainly isn’t showing all her cards, as she still suspects foul play in the disappearance of the girls. She hopes this trip will give her a chance to dig deeper into the mysteries of the camp.

What secrets is the elderly Franny hiding? What about her sons, one of whom Emma originally accused of harming the girls? Other players lurk on the edges–staff, former counselors, fellow campers now returning as instructors.

And maybe…Emma herself? Emma swears she’s done telling lies, but is that a lie, too? She has quite a few dark secrets of her own, as it turns out.

I rocketed through this book in one sitting, and I suspect you’ll have trouble putting it down too: it’s hard to guess what’s going to happen until the very last pages. Sager is a master of red herrings. The way the book switches between past and present also ratchets up the tension, as new truths and falsehoods are slowly revealed.

My recommendation: if you love twisty thrillers like Gone Girl, full of darkness and unreliable characters, do yourself a favor and clear out a weekend to binge-read this book! Just make sure you have a frozen pizza on hand, since you won’t want to stop reading to cook dinner.

The Last Time I Lied, by Riley Sager (384 pages, 2018). Five out of five stars. Thriller, mystery, suspense. Find it on Goodreads and don’t forget to follow me while you’re there for more book updates and reviews!

Love thrillers? You may also want to check out The Silent Wife, by A.S.A. Harrison.