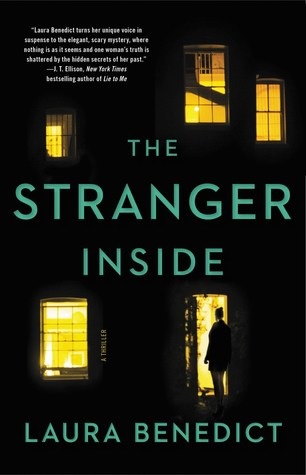 What would you do if you came home one day to discover a stranger living in your home? Sleeping in your bed, eating your food, going through your most private possessions…

It gets worse. This stranger has changed the locks, produced a “lease” with your apparent signature, and convinced the police he’s the rightful tenant. They think you’re crazy. You know you’re not.

Believe it or not, the story gets worse still.

The stranger knows you.

But who the hell is he?

I feel like The Stranger Inside had an incredibly strong premise with a less-strong delivery. It begins when Kimber Hannon arrives home from vacation to discover her key no longer opens her front door. As the hours turn into days, she realizes that the man now living in her home isn’t just after the house, or her money—he’s after her secrets. But which ones? After all, she has no idea who he is—but he certainly remembers her…

The main thing that ruined The Stranger Inside for me was that I simply did not like Kimber. She is, put crassly, a b*tch: she treats even the people who are kind to her like dirt scraped from the bottom of her shoes. While I initially felt horrible for her in the middle of this predicament, I felt less and less sympathy for her as the book went on.

That’s a problem, because without a protagonist to cheer for, you’re really just wading through a decades-old sea of lies, hate and bitterness. The reveal at the end was a head-turner, but by that point I didn’t really care if Kimber made it out all right or not. Whoops. I think she’s supposed to be a complex shades-of-grey gal but the heartlessness she had for her supposed best friend—who was an absolute angel to her—was a shade too much.

As for everyone else in the book, I guess they had their own reasons to be bitter, but also? It’s been twenty years, guys. Get over yourselves.

The Stranger Inside, by Laura Benedict (2019, hardcover, 345 pages). Three out of five stars. Mystery, suspense. Find it on Goodreads and follow me while you’re there for more reviews!