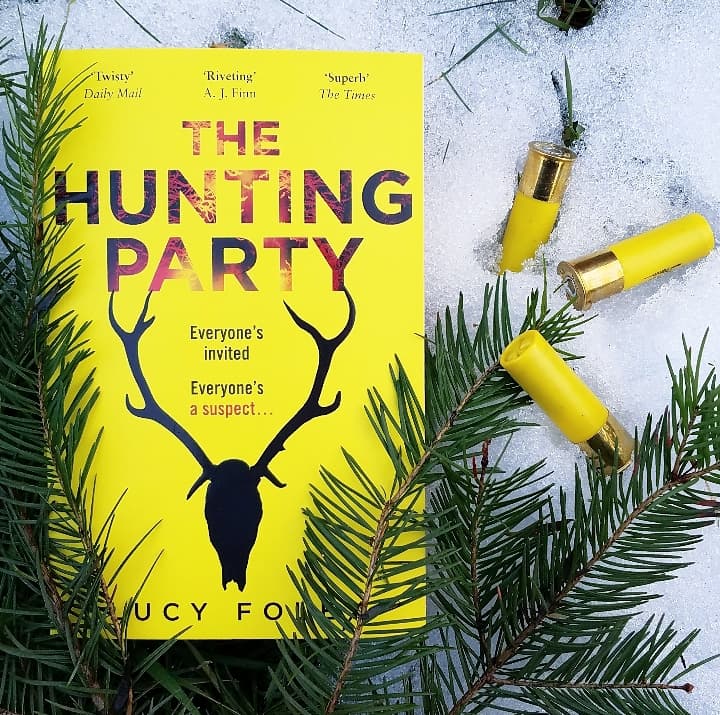 I’m always a little leery of books that claim to be alike to other, mega-popular titles. I’ve seen so many blurbs claiming a book is “the next Gone Girl” or “perfect for fans of Agatha Christie”. And quite honestly, books rarely live up to that sort of fanfare. (Likely in part because that hype causes the reader to set their expectations far too high!)

The Hunting Party has been marketed to fans of Christie, Tana French, and Ruth Ware–all authors I admire–so I tried to manage my expectations accordingly. But I’m pleased to say that for the most part, this is a top-notch thriller perfect for a cozy night in by the fire. Read on for spoilers, what I loved about the book, and the suspense trope I absolutely can’t stand. (It’s why this book didn’t score a perfect five stars!) P.S. make sure to follow me on Goodreads for more reviews and bookish updates!

The Hunting Party follows a classic formula: a group of old college friends gathers for New Year’s Eve at a remote lodge in the Scottish highlands. The party is intended to mend the fraying seams in their group, but as the booze flows, tempers flare and old secrets threaten to spill out. When the party is snowed in and a guest turns up missing, the getaway takes a sinister turn.

Some people, given just the right amount of pressure, taken out of their usual, comfortable environments, don’t need much encouragement at all to become monsters.

I love the classic set-up of an isolated group turning on each other as they try to figure out which one is a murderer. The setting really ramps up the tension and paranoia and personally I think it’s a lot more fun when you know there’s a very small pool of potential suspects to choose from. Other readers have stated the book is too formulaic but I think that comes with the territory of genre fiction, so I wasn’t bothered.

I do have to say that this group of “friends” was one of the most unlikable parties I’ve ever encountered. Almost all of them are selfish, manipulative, deceitful backstabbers. The ones who aren’t overtly bratty are just boring. How all of them have managed to stay in touch for so long is absolutely beyond me. It’s also really hard to get past how spoiled they are–the phrase “first world problems” comes to mind. So be warned–if you’re looking for characters to cheer for, you won’t find them here.

However, I can overlook unlikable characters for a good whodunnit, and so I did. The Hunting Party is a slow burn, the tension building as the former friends try (and fail) to have a good time. The story flashes back and forth pre- and post-party as we try to figure out which of the group has gone missing and who is responsible. These folks have a lot of baggage! Everyone here looks like a perfect suspect.

I hate you. I don’t feel bad anymore. You deserve everything that is coming to you.

How desperate is Emma to fit in with this group that still sees her as an outsider? Does Katie even care to tag along anymore? What about Miranda and Julien, the deeply unhappy golden couple? We also have new parents Samara and Giles; Emma’s boyfriend, Mark, who seems to be settling; and Nick and Bo, awkwardly distancing themselves from the free-flowing champagne and party drugs. Then there’s a backpacking couple that winds up snowed in on the property; and the gamekeeper, Doug, and the hostess, Heather, both escaping into the wilderness from traumatic pasts.

It’s a varied cast and I had trouble choosing a prime suspect. I don’t like drama in my own life but boy do I enjoy some juicy conflict in a fictional scenario!

Unfortunately this book makes use of one of my least favorite tropes (hidden under the spoiler tag below for those who want to skip it). It was enough to make me knock off half a star, just because it bugged me so much and it took up such a big chunk of the plot. The book did have a couple of other late reveals that partly made up for it.

I’m so bored with the mysterious, broody, traumatized stranger who exists almost solely as a red herring. I couldn’t consider Doug a legitimate suspect because he was painted soooooo strongly as “murderous” and “secretive” compared to the other characters, that it felt obvious he was innocent. That said, the plot had a couple of twists I didn’t see coming, with Emma revealed as Miranda’s stalker and an extra person sneaking around the estate, unaccounted for. So I did appreciate those late reveals!

Lastly, content warnings (hidden below) for those who want them.

I binged this book all in one sitting and I definitely feel like it lives up to the hype. If this was a Netflix series I’d probably watch it all in one weekend. If you enjoy books like The Woman in Cabin 10 or And Then There Were None then you should check out The Hunting Party–just don’t start it too close to your bedtime!

The Hunting Party, by Lucy Foley (2019); 390 pages; mystery, thriller. Four and a half out of five stars. See more about this book on Goodreads.

What’s your favorite psychological suspense novel? Do comparisons to super-famous authors make you more or less likely to pick up a book?